Kevin Ives and Don Henry, the first unsolved cases unrelated to the Inslaw case. Their story was showcased in an episode of Unsolved Mysteries.[1]

Arkancide is a neologistic term attributed to the killing of political opponents and having it framed as "suicide".[2] Sometimes known as being Epsteined is also commonly used. A reference originating with the Clinton body count, it is commonly used in connection with deceased persons ruled a "suicide" with two bullets in the back of the head. Many suspicious deaths began occurring in Arkansas when Bill Clinton was the state's governor, hence "Arkancide". These deaths have most often been caused by hitmen hired by the Clintons (most often, by Hillary Clinton[3][4]) to silence political opponents and to protect themselves against anyone who had potentially damaging information against them, regarding illegal activities they were involved in, that could end their political careers and send them to prison.[5][6]

One of the more bizarre cases among a plethora of bizarre cases was that of a witness in the Mena, Arkansas Ives/Henry double murder case (also known as The Boys on the Tracks). The state's chief Medical Examiner, appointed by Gov. Bill Clinton, originally ruled the Ives/Henry double murder as suicides, which was later overturned. The same medical examiner ruled a "suicide" the death of a witness whose decapitated head was found in a dumpster two blocks away.

Died: April 23, 1987. Known as "The boys on the track" case. Reports indicate that Ives and Henry stumbled upon and witnessed an aerial drop in the area of Bauxite and Alexander, Arkansas, part of the Mena drug smuggling operation.[7] Initial cause of death was claimed to be the result of passing out on railroad tracks in Saline County after smoking marijuana. The ruling was reported by the State chief medical examiner Dr. Fahmy Malak.[8]

Governor Bill Clinton stood by Malak even though a group of citizens and the Arkansas Democrat called for his dismissal. Clinton excused Fahmy Malek's "errors" saying that Malek was "tired and stressed out."[9][10][11] The existing evidence points toward two local policemen.[12] 7 more violent deaths occurred before their testimony could come before a Grand Jury.

Witnesses in the Ives/Henry case 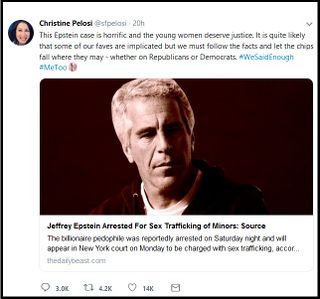 Christine Pelosi, daughter of House Speaker Nancy Pelosi, issued a heads up to loyal Democrats: "It is quite likely that some of our faves are implicated." The New York Times used the Orwellian phrase, "underage women," to refer to his child victims.[15]