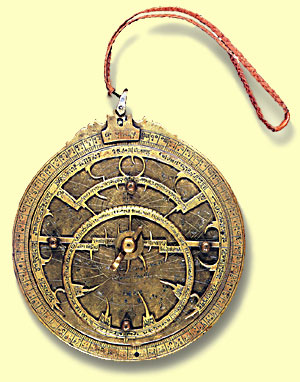 The astrolabe is a compact round disc used to observe and calculate the position of celestial bodies, commonly used before the invention of the sextant. It was the most widely used astronomical instrument of the Islamic and Medieval periods. The word "astrolabe" comes from the Greek ἀστρολάβος, "astrolabos", which translates as "star-taker".[1]

Astrolabes usually consist of a flat disc with a sighting rod that could be pivoted to point at the Sun or bright stars. From the altitude of the Sun or star above the horizon, the local time or position could be estimated.[2] Astrolabes were usually constructed of light metals, such as copper or zinc, however elaborate ornamental gold and silver astrolabes were created for wealthy rulers such as Pope Alexander VI and Suleiman the Magnificent.

There is a common misconception in the appearance of the astrolabe. Most people are more familiar with the mariner's astrolabe, a similar device invented to make reading location easier on the rough seas.[3]

Astrolabe is the name of the French Antarctic research and re-supply vessel, based in Hobart, Tasmania. Before that, it was the name of one of the vessels used by La Perouse in his ill-fated voyage of discovery into the Pacific in 1785/88.