The Aswan Dam, Aswan Low Dam and Lake Nasser are located along the Nile in southeast Egypt. The first Aswan Dam (or Aswan Low Dam) was built during 1898-1902 at the first cataract of the Nile, near Aswan. It was re-built higher in later years, and it provides a road crossing the large rocks of the Nile's 1st cataract. The newer Aswan Dam (or Aswan High Dam), 360 feet high, built from 1960-1970, was a project of Gamal Abdel Nasser. This second dam was built to prevent the Nile River from flooding and to generate electricity. The dam's waters drive one of the world's largest hydroelectric generating stations and are used to irrigate over 1 million acres of farmland.[1]

The dam had major political, socio-political and environmental repercussions. The withdrawal of pledges of finance by the United States and United Kingdom in 1956 prompted President Nasser to nationalise the Suez Canal and led to the Suez Crisis.

The Aswan High Dam stopped all seasonal inundation of Egypt. As a result, although free of the uncertainty of a low or high flood, it has led to the degradation of Egyptian agricultural land. Along with water, the inundation brought massive quantities of organically rich silt, which was deposited on the land as the water fell. This made artificial fertilisers totally un-necessary, and added greatly to the depth of the topsoil. The Nile delta was, prior to the dam, the most fertile agricultural region in the world, and the silt rich topsoil over 70 feet deep in places. This is no longer the case, and agriculture in Egypt is now entirely dependent on artificial fertilisers to keep the fields alive. 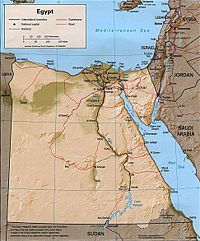 The Aswan Low Dam and Aswan High Dam are north of Lake Nasser (covering 200 miles along the Nile) in southeast Egypt (right-click image to enlarge).

In addition, Egyptian fields were, prior to the construction of the dam, the only large-scale irrigated agricultural area where soil salinisation did not occur. This was due to the "washing" effect of the inundation in flushing salts from the soil each year. Salinisation of agricultural land is now the single biggest problem in Egyptian agriculture, especially as irrigation methods centre around flood irrigation.

Soil erosion has also increased dramatically, as silt from the inundation no longer replenishes lost material along the riverbank, and also the low-lying delta coastline, which is largely built up on sediment transport from the Nile. As a result, the delta coastline is now heavily eroded, having retreated in some areas by over 1/4 of a mile, threatening the destruction of the brackish delta lagoons which support much of the Egyptian fishing industry, and many coastal settlements. Ironically, at the same time, Lake Naser, the lake formed by the Aswan High Dam, is silting up, reducing both its water storage capacity, and the ability of the dam to generate hydro-electric power.