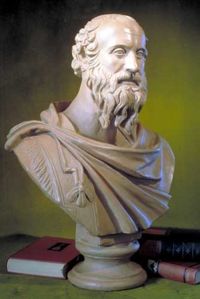 Antisthenes (445-365 B.C.) was a Greek philosopher and was the teacher of Diogenes of Sinope, who founded (perhaps with Antisthenes) the philosophy of the Cynics.

In relation to atheism and cynicism the article Atheism and Skepticism in Ancient Greece declares: Nihilism is the belief that life is, overall, meaningless. A true nihilist would have no loyalties, and no purpose. The atheist Friedrich Nietzsche argued that moral, religious, and metaphysical convictions lead to nihilism's corrosive effects; cause the collapse of meaning, relevance, purpose, and precipitate the greatest crisis in human history.[2] See: Atheism and meaninglessness

Author Greg Ganssle in his essay Cynicism and Affirmation declares: