The average is the sum of a group of numbers divided by the number of values in the group. For example, the average of 3, 5, and 7 is

Another term for average is the arithmetic mean.

Other "measures of central tendency"

An average takes a set of numbers and replaces it with a single number. The average has these properties:

Because of these characteristics, an average takes a group of numbers and replaces it with a single number that can be thought of as the center of the group, or as a representative value that can stand for the whole group.

The average is not the only measurement with these characteristics. It is one of a number of measures of central tendency. All of them replace a group of numbers with a single number that falls somewhere within the group.

Because the average is familiar and easily calculated, it is often chosen as the single number that summarizes a group. Depending on how the number is to be used, sometimes the average is a good choice, sometimes it is not, so it is important to understand the other choices.

An example of average, median, and mode

On A Prairie Home Companion, Garrison Keillor jokes about Lake Wobegon where "all the children are above average." It is not actually possible for all of the items in a set to be "above average." However, it is easy to concoct a highly skewed distribution in which 90% of them are. Imagine a circus act with nine clowns and one macaque monkey, and ask "what is the average weight of the performers in the act?" If the clowns weigh about 150 pounds each and the monkey weighs about 10 pounds, then the average weight of the performers is 1360 pounds / 10 performers = 136 pounds. The monkey is below average, and the nine clowns—90% of the performers—are above average.

The average as a "balance point" 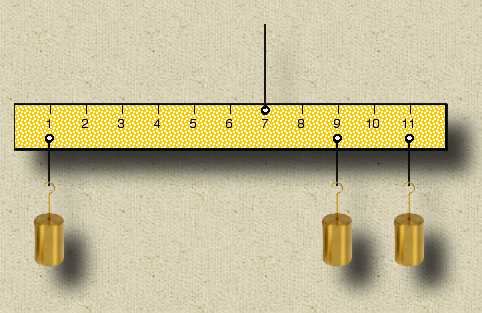 In the weight-and-ruler example, if we look at the distances of the weights to the left and right of the average, we see that

A weighted average is an average in which some of the items of the group count or weigh more than others.

One way to do this is to repeat an item or include it more than one time in the calculation of the average. For example, consider the ruler diagram above. Imagine that we hang ten weights at the 11" mark. Instead of

Giving extra "weight" to one of the items moves the average closer to the items with more weight.

When the weights are not integers, we do the calculation the same way. Instead of a sum, we use a weighted sum, in which each item is multiplied by a weighting factor; when we do the division, instead of dividing by the number of items, we divided by the sum of the weights. As an example of a case where a weighted average is appropriate: suppose I gas my car every Monday. Suppose that during one month price of gas is $2.00 per gallon the first week, $2.20 the second week, and $2.40 the third week, and $2.20 the fourth week. A newspaper report might say that the average price of gas for the month is the average of those four numbers:

For example, suppose that I did almost no driving on the first, second, and fourth weeks, and bought only one gallon because (for some reason) I wanted to keep the tank topped up, but that on the third week I was on vacation, took a trip, and used ten gallons. Since I did almost of my driving on the third week, the price of the gas I bought is going to be dominated by that third week. It is going to be close to $2.40 per gallon. If I hadn't bought any gas at all on the first, second, and fourth weeks, the price of gas on those weeks wouldn't have mattered at all. As it is, they don't matter very much.

If I look at the four receipts at the end of the month, I see: