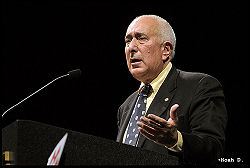 Benjamin Jeremy Stein, born November 25, 1944 (age 76), in Washington, DC, is a lawyer, writer, actor and economist. He is a conservative social activist, public speaker and presidential speechwriter.[1] He has also been a game show host.

His father was economist Herbert Stein. Stein earned a law degree from Yale. Having been a speech writer and lawyer for former Presidents Richard Nixon and Gerald Ford as well as a publisher of conservative thought in newspapers, Stein unexpectedly turned up with a new career on television after getting his start in the movie Ferris Bueller's Day Off as the boring high school economics teacher due to his monotone voice. In this scene, which was mostly unscripted[2], Stein showed a key knowledge for understated humor.

Stein has been married for 53 years - having married, divorced, and remarried the same woman.

A man of considerable intellect, Stein starred in his own gameshow, Win Ben Stein's Money, which would culminate in Stein taking on the winning contestant in a ten-question round to see who could answer more of the questions correctly. Most of the time Stein would emerge victorious. Stein had a subtle form of comedy playing the mostly straight man to Jimmy Kimmel as the joking cohost; however much of the banter contained sexual innuendos not suitable for children.

Stein went on to host his own talk show Turn Ben Stein On.

Today Stein can still be seen on television with his "dry humor" such as in the "dry eyes" commercial.

Stein has never lost his conservative roots or his desire to engage in intelligent dialogue. He has appeared many times on Fox News discussing politics and finance. Ben Stein also writes his "Diary" in every issue of The American Spectator, and is a regular weekly contributor to the Business Section of the New York Times.

Stein was on The Weakest Link along with seven other celebrities in 2002. Although he was the strongest link before voting was to take place for the final two, he was voted off by the other contestants who said they didn't want to face him head to head.

Stein co-wrote and appears as the narrator[3] in a movie (Expelled: No Intelligence Allowed), released in the US in April 2008 which portrays "Big Science" as suppressing Intelligent design from being discussed and considered in academic settings.

And he objects to the idea that we are nothing more than "mud animated by lightning".[1]