From Conservapedia
(Redirected from Bernard Henri Levy)
Jump to: navigation, search
“God is dead, but my hair is perfect”

Bernard-Henri Lévy (born in Algeria in 1948, to a wealthy Sephardi Jewish family) is a French journalist. He studied at the École Normale Supérieure in 1968, from which he graduated with a degree in philosophy. A pop philosopher, Lévy was one of the leaders of the "Nouvelle Philosophie", a French movement in 1976 vaguely inspired by Michel Foucault (who had mixed feelings about the association). They are known for making appearances on television and writing books about philosophy but abstaining from publishing in any philosophical journals or engaging in debates with their peers.[1] He 's been labeled by those who know him well and have worked closely with him as an intellectual fraud and Islamofascist.[2]

An aged Jean Paul Sartre thought he was a CIA agent.

Lévy has three best friends: Gilles Hertzog, grandson of a founder of the French Communist Party, Jacques Martinez, a painter, and Jean-Paul Enthoven, an editor at Grasset.

"Bernard Henri Lévy, a friend of Nicolas Sarkozy since 1983 but with an extremely complicated relationship, is the man who, some consider, waged a war in Libya. Lévy, 62, a Zionist[3] French philosopher is the man behind the French and American War on Libya... After persuading Sarkozy, Mr. Lévy gives Mr. Sarkozy sole credit for persuading London, Washington and others to support intervention in Libya." [4] 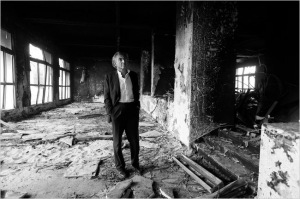 BHL in the ruins of a residence of Qaddafi in Benghazi.

The man who introduced Sarkozy to the Benghazi rebels is none other than Bernard-Henri Levy, a pop philosopher so French that I can’t think of an American equivalent. We just don’t have philosophers who wear their shirts unbuttoned, marry blond actresses and take sides, enthusiastically, in wars in Bangladesh, Angola, Rwanda, Bosnia and beyond.[5]

Two French journalists—Nicolas Beau of Le Canard Enchainé and Olivier Toscer of Le Nouvel Observateur—have published in Paris Une Imposture Francaise (A French Imposter), an inquest into how BHL has built his success. They wrote: At Benghazi a revolutionary committee office.

A philosopher who’s never taught the subject in any university, a journalist who creates a cocktail mingling the true, the possible, and the totally false, a patch-work filmmaker, a writer without a real literary oeuvre, he is the icon of a media-driven society in which simple appearance weighs more than the substance of things. BHL is thus first and foremost a great communicator, the PR man of the only product he really knows how to sell: himself... BHL changes his political allegiances like one of his shirts.[6][7]

A review of his movie The Oath of Tobruk, which he wrote, produced, directed and starred in, celebrating the tragic events in Libya which took 40,000 lives after Levy's personal intervention for "humanitarian purposes", describes Levy as a self-promoting militant philosopher leftist intellectual.[8] The movie was made with an eye to being his entry at the Cannes Film Festival. The film depicts the adventures of a fascist warmonger with a cameo appearance by Hillary Rodham Clinton.[9]

...it would be nice to know, and without delay—how a chambermaid could have walked in alone, contrary to the habitual practice of most of New York’s grand hotels of sending a “cleaning brigade” of two people, into the room of one of the most closely watched figures on the planet.[10]

For years, I’ve stayed at the Sofitel and other hotels in New York City, and I’ve never seen a “brigade,” simply single maids coming in to clean. [11]

I am troubled by a system of justice modestly termed “accusatory,” meaning that anyone can come along and accuse another fellow of any crime—and it will be up to the accused to prove that the accusation is false and without basis in fact. [10]

Next month, the nations of the world will meet in Geneva to talk about racism. The philosopher Bernard-Henri Lévy says the whole thing is a sham, a setup to blame the world’s ills on Israel. We must boycott. [12]