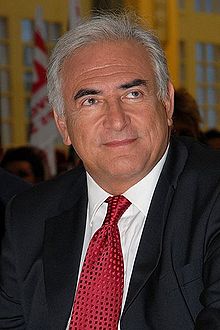 Dominique Gastón Andrés Strauss-Kahn (Neuilly-sur-Seine, Paris, 1949), referred to as DSK, is a French economist, lawyer, and a leader of France’s Socialist Party; he was head of the International Monetary Fund. Strauss-Kahn after graduating from two of the finest academic institutes in France: the École des hautes études commerciales de Paris and the Institut d'études politiques de Paris, obtained a degree in public law and a PhD in economics from the University of Paris X. Strauss-Kahn was a member of the political generation that created the euro and someone who had the respect of the euro zone's most senior politicians and officials. [1]

On May 14, 2011, he was arrested in connection with the alleged sexual assault of Nafissatou Diallo, a 32-year-old chambermaid from the West African nation of Guinea, at a Manhattan hotel.

Some, including Mr. Strauss-Kahn’s wife, the American-born French television journalist Anne Sinclair, expressed disbelief in the charges and faith in her husband’s innocence. His lawyer has said he plead not guilty. Others talked darkly of a possible “setup” of Mr. Sarkozy’s most prominent rival. [2] The charges lodged by New York prosecutors against Dominique Strauss-Kahn are extremely serious, said criminal-defense lawyers, and could lead to significant prison time for the former International Monetary Fund head if he is found guilty of even one of the main charges. "Prosecutors have charged this as heavily as they possibly could have," said Daniel J. Horwitz, a criminal-defense lawyer in New York and a former prosecutor in New York. [3] During an interview with French newspaper Liberation, the IMF chief predicted that his enemies could use his proclivity for promiscuity against him if he chose to run for president of France. [4]

Strauss-Kahn was born in the Paris suburb of Neuilly-sur-Seine to Jewish parents in 1949. His period as head at the IMF has not just been about steering the global economy out of a slump. It has also been about strengthening his CV as the most able French Socialist capable of challenging Nicolas Sarkozy for the French presidency in 2012... Strauss-Kahn, who was French finance minister from 1997 to 1999, made a splash when he arrived at the Davos World Economic Forum in January 2008 and stunned financial leaders by suggesting that what the world needed, to prevent it falling into deep recession, was a large fiscal stimulus. His diagnosis, some eight months before the collapse of Lehman Brothers, and more than a year ahead of Gordon Brown, was ahead of the game and a sharp divergence from IMF orthodoxy. Strauss-Kahn changed the IMF old solution for everything; he changed the so-called fiscal consolidation a polite name for cutting budgets and raising taxes; together with John Lipsky, from a Jewish family in Iowa, he designed a new flexible loan facility. [5]

John Lipsky has been announced on 15 May 2011 to temporarily replace Strauss-Kahn as the IMF's CEO.

On June 30, 2011 according to The New York Times doubts raised over veracity of accuser; officials said: The sexual assault case against Dominique Strauss-Kahn is on the verge of collapse as investigators have uncovered major holes in the credibility of the housekeeper who charged that Strauss-Kahn attacked her in his Manhattan hotel suite in May. On August 2011, Manhattan judge Michael Obus dismissed all charges following a recommendation for dismissal filed by the District Attorney's office, which asserted that the complainant's untruthfulness made it impossible to credit her. [6] [7] On June 2015, French court clears him of "aggravated pimping" in multi-defendant trial over sex parties. [8]

“Let me say this clearly, the types of remuneration in the financial system are verging on crime.” [9]

"The disposition to admire, and almost to worship, the rich and the powerful and…neglect persons of poor and mean condition…is the great and most universal cause of the corruption of our moral sentiments." Dominique Strauss-Kahn quoting Adam Smith.