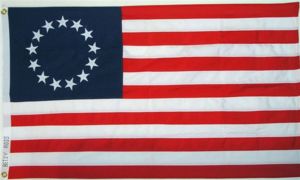 Betsy Ross, born on Jan. 1, 1752 as the 8th of 17 children, is famous as one of the characters in the story of the birth of the United States of America. Her birth name was Elizabeth Phoebe Griscom.

Her husband died at the beginning of the American Revolution while he was guarding a munitions depot. General George Washington then asked her in June 1776 to sew an American Flag, which is what we know her best for.

A Quaker, she married John Ross, who was the son of an Episcopal rector. John was the nephew of a future signer of the Declaration of Independence, George Ross.