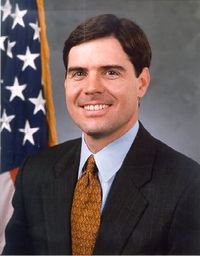 William A. Halter (born November 30, 1960) was a Democrat who served as the fourteenth Arkansas Lieutenant Governor, from 2007 to 2011. In 1999, Halter was nominated by former President Bill Clinton and was unanimously confirmed to the position of Deputy Commissioner and later as Acting Commissioner of social security-which consisted of over 65,000 employees.[1]

Halter previously worked as a Management Consultant with McKinsey and Company where he co-authored a study on the management practices of successful companies. He is also a member of the Board of Directors of Threshold Pharmaceuticals and Akamai Technologies, two biotechnology and information technology companies.