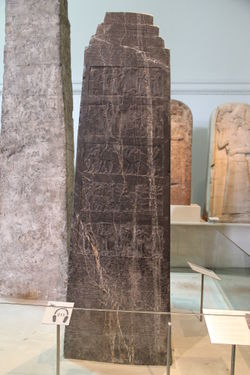 The Black Obelisk is a monumental stela commemorating the deeds of Shalmaneser III, king of the Assyrian Empire (859–824 BC), and currently on display in the British Museum.[1] The most complete Assyrian obelisk ever found, it is noteworthy for bearing the first historical depiction of an Israelite king.

The Black Obelisk was possibly commissioned by the commander-in-chief of the royal army, Dayyan-Assur, in 825 BC, and set up within the courtyard of a central building in the Assyrian capitol of Kalhu (Biblical Calah; today, the archaeological site of Nimrud), and was still there when discovered in 1846 by Sir Austen Henry Layard. It is of black limestone, standing just over 77 inches tall and 17 inches wide. It has four sides, and tapers up to three steps with a flat top, invoking the image of a ziggurat. At the top and at the base of the obelisk are inscriptions written in cuneiform, relating to Salmanassar's military campaigns during his thirty-one year reign.

Accompanying the inscriptions are pictoral scenes carved in bas-relief, twenty in all, and divided into five scenes of four panels each, accompanied by cuneiform inscriptions. Each of the scenes represents the submission of a foreign king who offers tributes to Salmanassar, prostrating himself before him and paying homage to him. The scenes are meant to be read in a counter-clockwise manner, circling the obelisk, and represent the following submissive rulers (top to botton):

The second scene presents the oldest iconographic testimony of an Israelite sovereign, the biblical king Jehu of Israel, who is mentioned in II Kings (ch. 9-10). On the Black Obelisk Jehu is depicted kissing the earth in front of the Assyrian chief as a sign of his submission, ca. 841 BC. The cuneiform inscription accompanying the bas-relief reads:

"Tribute of Jehu, son of Omri: I received tribute from Iaua, son of Omri: silver, gold, a golden bowl, a golden tureen, golden pails, tin, the staffs 'of the king's hand' and a spear"[2]

In addition to the Black Obelisk, Jehu was also mentioned in the Annals of Salmanassar.[3]

"In the 18th year of my reign I crossed the Euphrates for the sixteenth time. Hazael of Damascus trusted in the power of his forces, marshalled his troops in full strength. He made Senir (Mt. Hermon), the summit of the mountain opposite Lebanon, his stronghold. With him I fought, and defeated him. Six thousand of his soldiers I brought down with weapons; 1121 of his chariots, 470 of his horses, together with his camp, I took from him. To save his life he fled; I pursued him; in Damascus, his royal city, I shut him up. His plantations I destroyed. As far as the mountains of Hauran I marched. Towns without number I laid waste, razed, and burnt with fire. There innumerable spoil I carried away. As far as to the mountains of Baal-rasi situated close to the sea (the head of Dog River), I marched. My royal image I set up in that place. At that time I received the tribute of the Tyrians and Sidonians, and of Jehu the son of Omri."[4]