From Conservapedia
(Redirected from Black box)
Jump to: navigation, search 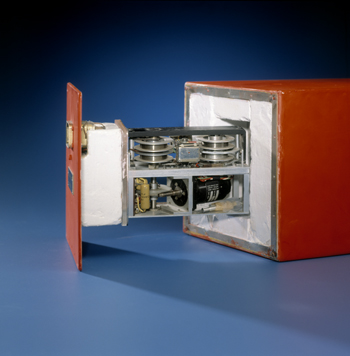 A flight recorder is an airplane’s Digital Flight Data Recorder (DVDR) and Cockpit Voice Recorder (CVR) installed as one unit. "Black box" is the common name used in news stories. Despite this fact, 'black boxes' are almost always orange, to make them easier to see in wreckage.

The Flight Data Recorder was invented by an Australian named Dr. David Warren. The original model was red, although these days they are usually orange to make them easier to find. A journalist at the launch described it as a “wonderful black box” to make the point that how it worked was complex and one didn’t really need to know, but that it worked was the important thing.[1]

The phrase has since been commonly used to describe a device about which nothing is known of its inner workings. Computers could be considered a black box, as most people who use computers know almost nothing of their apparatus. Lehigh University Professor and Intelligent Design proponent Michael Behe used this analogy in naming his book Darwin's Black Box, which deals with the issue of irreducible complexity in biological cells.

Korean Airlines Flight 007 was a Boeing 747 shot down by the Soviets on Sept. 1, 1983 just west of the Soviet territory of Sakhalin Island off the Siberian Maritime. There were 269 passengers and crew aboard. For over 10 years the Soviets denied having retrieved the black box but on January 8, 1993, Boris Yeltsin, under pressure from Senator Jesse Helms of the Committee on Foreign Relations, handed the Cockpit Voice Recorder and the Digital Flight Data Recorder tapes from the black box to the International Civil Aviation Organization of the United Nations. Here are the combined Cockpit Voice Recorder and Flight Data Recorder transcripts chronicalling the first minute and 44 seconds of the flight of KAL 007 after missile detonation.[2]