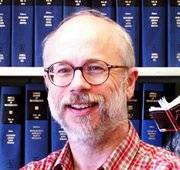 Michael Behe is a biochemist, author and professor at Lehigh University in Pennsylvania. His books include Darwin’s Black Box and The Edge of Evolution, which both highlight the inherent problems with evolutionary theory and present a case for intelligent design. He argues that molecular machines, such as the bacterial flagellum, are irreducibly complex. Such machines require all of their parts to function, Behe says, and so could not have come into being through an unguided process. He considers this evidence that the flagellum must have been designed.

Michael Behe received his Ph.D. in biochemistry from the University of Pennsylvania in 1978, where his dissertation was on sickle cell disease, and he subsequently spent four years researching aspects of DNA structure at the National Institutes of Health before joining the Lehigh faculty in 1985.[1]

"There is no publication in the scientific literature that describes how molecular evolution of any real, complex, biochemical system either did occur or even might have occurred. There are assertions that such evolution occurred, but absolutely none are supported by pertinent experiments or calculations." Darwin’s Black Box (New York: The Free Press, 1996), p. 186[2]

Behe has a skeptical view of the pseudoscientific idea of "common descent":

"The word "evolution" carries many associations. Usually it means common descent—the idea that all organisms living and dead are related by common ancestry. I have no quarrel with the idea of common descent, and continue to think it explains similarities among species. By itself, however, common descent doesn't explain the vast differences among species."[4]

It is common for evolutionists to engage in namecalling against Behe, to which he responds:[1]

Behe's Criticism of the Materialistic Science of Francis Crick

Peer review of his ideas

During Behe's testimony at the trial of Kitzmiller v. Dover Area School District, opponents of intelligent design made the objection that this concept has not been published in peer-reviewed journals. Behe testified that his book was subjected to peer review as rigorous as that of journals:[6]

Q (Plaintiffs' attorney). You would agree that peer review for a book published in the Trade Press is not as rigorous as the peer review process for the leading scientific journals, would you?

A (Michael Behe). No, I would not agree with that. The review process that the book went through is analogous to peer review in the literature, because the manuscript was sent out to scientists for their careful reading.

Furthermore, they read it more carefully than most scientists read typical manuscripts that they get to review because they realized that this was a controversial topic. So I think, in fact, my book received much more scrutiny and much more review before publication than the great majority of scientific journal articles.

Q. Now you selected some of your peer reviewers?

A. No, I did not. I gave my editor at the Free Press suggested names, and he contacted them. Some of them agreed to review. Some did not.

Critics claim that the peer review for Behe's book was not as thorough as journal peer review, yet fail to make meaningful comparison to the questionable peer review done for pro-evolution papers published in journals.

Behe has recently published a peer-reviewed paper on the observation of evolutionary mutations. Prominent evolutionist Jerry Coyne has praised it, but warned that creationists may draw the wrong conclusions.[7] Behe has responded to Coyne.[8]