Blaise Pascal (1623-1662) was a French mathematician and philosopher, who was homeschooled by his father.

A child prodigy, Pascal wrote his first scientific paper at age 8 and by 16 had written a mathematical essay advancing the field of geometry.

At age 19, Pascal invented the first calculating machine. At age 23, Pascal proved the existence of the vacuum, which made possible barometers, hydraulic devices and hypodermic syringes.

At age 31, Pascal developed a deep relationship with Christ. To help others know Christ, Pascal proposed a "wager" (Pascal's wager):

When everything is moving at once, nothing appears to be moving, as on board ship. When everyone is moving toward depravity, no one seems to be moving, but if someone stops, he shows up the others who are rushing on, by acting as a fixed point. - Pascal, quoted in The Silence of Adam: Becoming Men of Courage (Page 170)

Pascal is credited with developing the mathematical theory of probability (along with Pierre de Fermat), and he discovered the significance of what is now known as Pascal's triangle. He also contributed to calculus.

Experimenting with the vacuum, Pascal published in 1663 his study TRAITÉ DE LA PESANTEUR DE LA MASSE DE L'AIR, where he argued that "experiments are the true teachers which one must follow in physics"... Pascal´s studies deeply influenced the development of modern essay writing. The idea of intuition as presented in Pensées had an impact on the philosophy of Jean-Jacques Rousseau (1712-1778), Edmund Husserl (1859-1938), and Henri Bergson (1859-1941) [1] 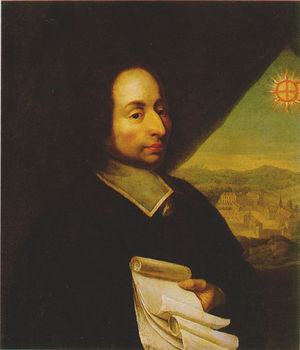 His famous Provincial Letters directed against the Jesuits, and his Pensées, were written towards the close of his life.[1]

It is the heart which perceives God and not the reason.

The heart has its reasons which reason knows nothing of.

Man is but a reed, the weakest thing in nature; but he is a thinking reed.

Pascal cited fulfilled prophecies as one of the most important factors in his faith.[2]

From 1660 to 1662 Pascal worked on a public transportation system for Paris.