Khmelnytsky was born into a family of Ukrainian lesser nobility. His father, Mykhailo Khmelnytsky, served in the Polish military, and his mother was a descendent of kozaks. His birthplace is unknown. He was schooled in Ukrainian and later in Polish by the Jesuits. Khmelnytsky was an Orthodox Christian. He was married to Hanna Somko and they settled on his estate near Chyhyryn.

There is little known of his earliest military activities. His first action was at the Battle of Cecora in 1620. He was captured and held in Turkey for two years until his mother ransomed him. He rose through the military ranks, becoming a military chancellor in 1637. Khmelnytsky's reputation gradually rose, and in 1638 he visited Warsaw as part of a Kozak emissary delegation to petition the Polish King Wladyslaw IV Vasa to grant the Kozaks their ancient rights. In 1645, he took part in the siege of Dunkirk, France.

Khmelnytsky began to come in conflict with the other Polish landowners in Ukraine. In 1651, while Khmelnytsky was on campaign, Daniel Czaplinski, who had a personal grudge against him, raided his estate causing property damage, killing his wife, and severely beating his young son. Aleksander Koniecpolski, another Polish noble, put out a warrant for Khmelnytsky's arrest and execution. Khmelnytsky hid out with other Kozaks, then fled to the Zaporozhian Sich were he was elected hetman in 1647.

Khmelnytsky on a 5 Hryvnia Banknote

In Ukraine, Khmelnytsky is viewed as a national hero. He appears on the five Hryvnia banknote, and a city is named after him. Some Ukrainians are critical of his decision to ally himself with Russia, knowing the disastrous effects that this had on Ukraine. Others say that he did what he thought was best for Ukraine at the time. In Poland, Khmelnytsky is viewed as a villain. Many blame him for Poland's weakness following his rebellion and the countries subsequent disappearance via the partitions. Khmelnytsky is also viewed as a villain by the Jews. Khmelnytsky and his Kozaks needlessly slaughtered thousands of Jews during their rebellion. The reason for this was anti-Semitism and the belief that the Jews "exploited" them. 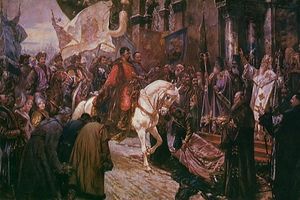 Khmelnytsky is one of the main characters in the Polish novel With Fire and Sword (Polish: Ogniem i mieczem) by Henryk Sienkiewicz. The book is about his uprising and was written from the Polish perspective, thus it portrays him and the kozaks in a bad light. The book was also made into a movie, that was more balanced and fair that the book.