The paper claims an apparent decay trend that levels off as time goes on. He speculates on the added consequence of nuclear decay having been faster in the distant past.

This theory is overwhelmingly rejected by the scientific community.

The paper seems to make two definitions of a time scale. One, called "atomic time", is calibrated from the orbital speed of the electrons in the Hydrogen atom. It, for all practical purposes, matches the time scale that the scientific community uses. (The scientific community currently uses a hyperfine transition in the Cesium spectrum, but they depend on the same fundamental constants and are, for all practical purposes, the same.) If "atomic time" had changed significantly during the time that scientific measurements were being made, it would have been noticed. In fact, if it differed at any point in human history, such things as colors of light would have changed noticeably.

The other scale he refers to as "dynamical time". It is apparently calculated from the Earth's orbital period around the sun. Prior to the adoption of the Cesium standard in 1967, the Earth's daily rotational period was used as the scientifically accepted time scale. Whether the Earth's daily rotation or yearly revolution is used doesn't matter; any disconnect between them at any time in human history would have been clearly noticed.

It is important to keep in mind what Setterfield is actually saying: that electrons made more orbits of an atomic nucleus, per day (Earth rotation) in the past than in the present. That ratio could, in principle, be measured, though no one seems to have done so in the distant past.

Setterfield recognizes that changes to the speed of light, without changes to other fundamental constants, would wreak havoc with many observations. He posits that Planck's constant has changed in the opposite direction from the speed of light, so that the product of the two remains constant. This means that the "fine structure constant" remains the same. Setterfield recognizes that a change to the fine structure constant would have extremely serious consequences.

The bulk of the paper is huge tables, footnotes, and descriptions of many constants and many historical measurements of same. That part is extremely difficult to read. The readable part is "APPENDIX I: NON-TECHNICAL SUMMARY", which is the last 7% of the paper. The important points made are that:

Setterfield then gives observational evidence that the speed of light (as measured in dynamical time) has been decaying during the period of a few hundred years that scientists have made measurements. The data are summarized in two graphs. 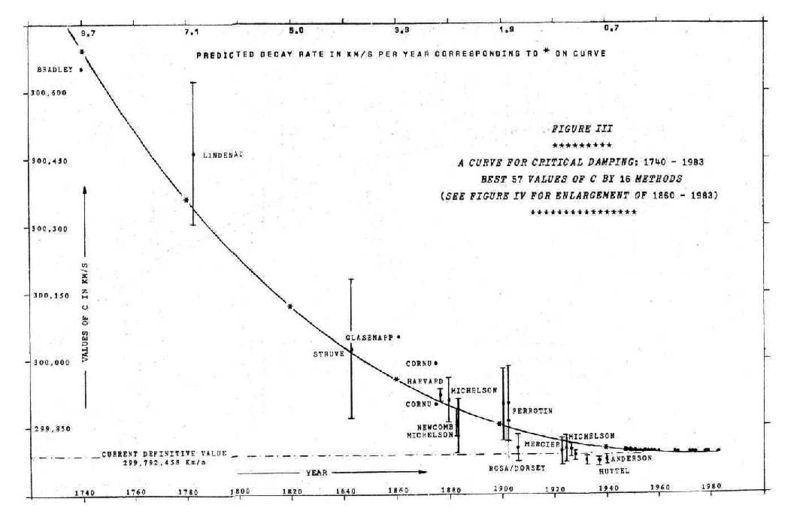 Several things are noteworthy about the graphs. They show curves with historical observations imposed on them.

, given above, is the (changing) ratio between the "atomic" and "dynamical" time scales, it is possible to integrate this to get the actual correspondence. It is

Notwithstanding the integration above (which might be incorrect due to a misunderstanding of Setterfield's paper) he says that, in the deep past, the divergence ratio between "atomic" and "dynamical" time could have been as much as 107 or even more. A ratio in that range would, conveniently, suggest that 6000 years ago in "dynamical" time would correspond to about 13 billion years ago in "atomic" time, putting the cosmologist's and creationist's dates for the beginning of the universe in agreement. Setterfield accepts the cosmologist's date of 10 to 15 billion years ago in "atomic" time.

Setterfield draws conclusions about radioactive decay. Since he says that it is an atomic process, it is tied to the "atomic" clock. This means that, in the distant past, a radioactive isotope would have had more disintegrations per "dynamical" second. That is, their radioactivity would have been "hotter". But Setterfield says that this is compensated for by a diminution in the energy per disintegration, so that the actual amount of radioactive energy was the same. He does not say why this is so.

While Barry Setterfield appears to be a creationist and Biblical literalist, and has written on those topics elsewhere,[4] the principal paper makes no reference to creationism, the Bible, or religion.

While Barry Setterfield does not appear to support Darwinian evolution, his supplemental paper recognizes the same geological eras as those of mainstream scientists, such as the Permian, Cenozoic, etc. He places them in the same time frame (in "atomic" time, of course) as mainstream scientists, that is, millions or billions of ("atomic") years ago.

There is no serious scientific evidence that the speed of light has ever changed in the history of the universe, except under contrived scenarios about different time scales, such as Setterfield's theory. The usual investigations involve the possibility that the fine structure constant may have changed in cosmic time. (Setterfield avoids this whole question by stating that Planck's constant changes exactly inversely to the speed of light.) If the speed of light changed but Planck's constant were not inversely proportional, it would show up in the fine structure constant. Researchers have done calculations about how spectral lines of elements would shift if the fine structure constant changed, and about how the abundance of Uranium fission decay products would change. It is possible to separate out various aspects of spectral line shift from the uniform redshift of cosmic expansion. The characteristic differential spectral line shift was not observed, placing a tight small bound on possible changes in the speed of light since early cosmic time. Analysis of the fission product abundance in the Oklo "natural nuclear reactor" got inconclusive results for very tiny shifts. But "tight bounds" doesn't mean that any possible change is exactly zero.

In any case, Setterfield's theory derives entirely from the use of different time scales, that match in the present but not in the past, so his "C decay" is simply a consequence of the divergence of the time scales. His claim that the scales diverge is based on the supposition that the Earth's rotation does not track electron orbital speeds. His graphs of measurements of the speed of light are really just measurements of his claimed divergence between those two phenomena. This can't be directly tested, because no one was running Cesium clocks 6000 years ago. But mainstream scientists maintain that the fundamental laws of physics governing electron orbits and planetary orbits have not changed, and that the above graphs do not show otherwise.

It is interesting that, if one uses a different way of measuring time in the past, creationists can be in complete agreement with the scientific community on such issues as the age of the Earth, radioactive decay rates, and so on, as long as one uses the different time scales. For example, Creationists often claim that the scientific community's dating of rocks through radioactive decay (relative abundances of various isotopes) is incorrect because radioactive decay rates are not constant. But this all makes perfect sense with a different time scale. Creationists and mainstream cosmologists all agree on the history of the universe, the only difference being that mainstream cosmologists use a clock that says the universe began 13 billion years ago, while creationists use a clock that places the event 6000 years ago.

There are other formulae that involve the speed of light, such as de Broglie's formula

. It applies to particles with mass of zero, that is, photons. There are compelling reasons (rooted in relativity) why this is so. If the speed of light changed, there would have to have been changes in either the energy, or the momentum, of both, of photons. Since photons from deep cosmic time are arriving on Earth at present, those quantities bring up interesting questions. Did the photons slow down in flight? Did their energy decrease? Did their momentum increase? Do photons travel at the speed of light in the epoch in which they were emitted? Or at the speed of light wherever they are at the time?

The speed of light also appears in relativity, obviously. The various various facts of relativity follow from a few simple principles, and one not-so-simple one: Measurements of space and time are linear, all inertial observers are equivalent (that is, Galilean relativity), nature is not capricious (that is, an experiment one does today will get the same result tomorrow), and, notwithstanding Galilean relativity, the speed of light is the same for all observers. If those assumptions were true in the distant past, then relativity was true, including such things as the formula E=mc2, where "c" is the speed of light appearing in the assumptions. From Maxwell's equations, that speed would be the actual speed at which light travels, so the "c" in E=mc2 would be larger in the distant past. That means that, for Radium decay, the loss of mass would have been less, or the alpha energy would have been greater, or both.

We have no way of measuring the mass loss or alpha energy from Radium disintegrations in deep cosmic time. But we do have access to photons from that era, so we could, in principle, make measurements that would bear on de Broglie's formula.

The larger question, of course is: would relativity, and E=mc2, be true in other universes? We don't know.

There have been a number of criticisms of Setterfield's Theory, in both the mainstream scientific community and the creationist community.[5][6][7][8]