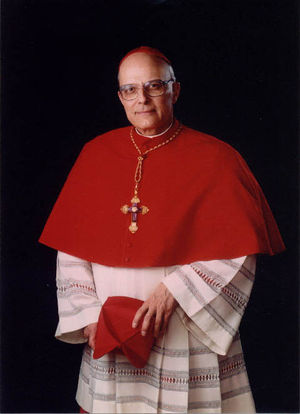 A cardinal in the Catholic Church is the highest rank of an ordained clergyman other than pope.

Periodically the pope elevates bishops of his choosing to the position of cardinal by appointing them to membership in the "College of Cardinals." The primary responsibility of members of the College of Cardinals is to gather together in Rome to elect a new pope upon the death of the previous one. Between such elections, individual cardinals may be assigned to leading administrative positions in the Vatican, and larger groups of cardinals are occasionally called into special session in order to advise the pope.

Only those cardinals who are under 80 years old may participate in the conclave that elects a new pope.[1]