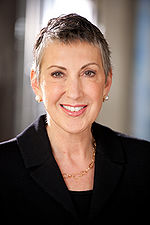 Cara Carleton "Carly" Fiorina (née Sneed; born September 6, 1954) is an American businesswoman. Fiorina is known primarily for her tenure as CEO of Hewlett-Packard (HP) and as Chair of the philanthropic organization Good360. She ran for the Republican Party's nomination of President of the United States in 2016. She has since become a Never Trumper.[1][2]

As Chief Executive Officer of HP from 1999 to 2005, Fiorina was the first woman to lead a Top-20 company as ranked by Fortune Magazine.[3] In 2002, Fiorina oversaw what was then the largest technology sector merger in history, in which HP acquired rival personal computer manufacturer, Compaq. The transaction made HP the world's largest seller of personal computers.[4][5] HP subsequently laid off 30,000 U.S. employees in order to save 80,000 jobs.[6][7][8] In February 2005, she was forced to resign as CEO and Chair, following a boardroom disagreement.[9][10][11]

In March 2016, Fiorina endorsed Ted Cruz for the nomination. On April 27, 2016, Cruz named Fiorina as his running mate. On May 3, 2016, Cruz dropped out of the race. On December 19, 2016, after Trump's victory in the election, the Electoral College convened; Fiorina received one electoral vote for Vice President of the United States.[12]

Fiorina was born in Austin, Texas. Her parents were Joseph Tyree Sneed, III and Madelon Montross. She studied at Stanford University, at the University of Maryland, and at the Massachusetts Institute of Technology.

In 2002, Fiorina undertook the biggest high-tech merger in history with rival computer company Compaq, which made HP the world's largest personal computer manufacturer.[14][15]

Fiorina performed unpaid service on the Defense Business Board, which looked at staffing issues, among others, at The Pentagon.[16]

Fiorina spent two years leading the Central Intelligence Agency's External Advisory Board, from 2007 to 2009,[16] and became chair of that board,[17] when the board was first created in 2007 by then-CIA director Michael Hayden during the George W. Bush administration.[18]

After resigning as CEO of HP, Fiorina served on the boards of several organizations and as an advisor to Republican John McCain's 2008 presidential campaign. She won a three-way race for the Republican nomination for the United States Senate from California in 2010 but lost the general election to incumbent Democrat Senator Barbara Boxer.[19]

On November 4, 2009, Fiorina formally announced her candidacy in the 2010 Senate election in a bid to unseat incumbent Democrat Barbara Boxer.[20]

On June 8, 2010, Fiorina won the Republican primary election for the Senate with over 50 percent of the vote, beating Tom Campbell and State Assemblyman Chuck DeVore.[21]

Fiorina was married to Todd Bartlem from 1977 until they divorced in 1984. Then, she married Frank Fiorina in 1985.

Fiorina is a Christian who believes that everyone is "equal in the eyes of God."[27]