The Catholic Irish have been a major American ethnic group since they started arriving in the 1830s in the wake of the horrible Irish Potato Famine. Extremely poor with a strong group cohesiveness, high interest in politics, and high rates of alcoholism and violence, they settled in the slums of large cities. many worked in construction gangs. The Irish rose rapidly in the ranks of the Democratic party, the Catholic Church, and (after 1880), the labor unions. The Irish were very well organized, and, since 1850, have produced a majority of the leaders of the Catholic Church in the United States, labor unions, the Democratic Party in larger cities, and Catholic high schools, colleges and universities. Politically, the Irish Catholic typically voted 80-95% Democratic in elections down to 1964.

About 45 million Americans are of Irish descent—but a majority are Protestants.

Irish Catholics began arriving in the 1830s and especially 1840s, in the wake of devastating famine in Ireland. (Others went to Great Britain, Canada and Australia.)

Very high group cohesion enabled labor bosses to organize unskilled workers into construction gangs and move them to locations wehere canals and railroads were being built. Native Americans rarely did this work (although in the South slaves were used, and in California Chinese.) The Irish fought for the jobs against other Irish work gangs.

Many served in the Civil War (on both sides) but they resented the draft and rioted in New York on a major scale in 1863.

Irish in politics and government

The Catholic Irish moved rapidly into law enforcement, and (through the Catholic Church) built hundreds of schools, colleges, orphanages, hospitals, and asylums. Political opposition to the Catholic Irish climaxed in 1854 in the short-lived Know Nothing Party. The Irish vehemtly opposed blacks and abolitionists before and during the Civil War, and led the battle to stop Chinese immigration in the 1870s. The most important organization in the late 19th and early 20th century was the Ancient Order of Hibernians. Irish dominated the Knights of Columbus, but it was open to Catholics of all ethnicities. 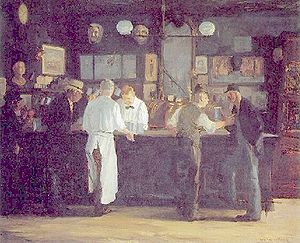 The Saloon was the inevitable Irish hangout. John Sloan pained "McSorley's Bar" in 1912--the tavern is still in operation in Manhattan.

The Irish Catholics formed gangs that used violence to control neighborhoods and work places (so that only gang members could get jobs). Combined with high rates of drunkenness and disorder, he gangs meant the Irish crime rate was very high.

The most famous violent gang was the Molly Maguires who terrorized the coal mining camps of Pennsylvania until broken up by hanging 18 leaders in 1877.

By the 1850s, the Irish Catholics were a major presence in the police departments of large cities. In New York City in 1855, of the city's 1,149 policemen, 305 were natives of Ireland. The creation of a unified police force in Philadelphia opened the door for the Irish in that city. By 1860 in Chicago, 49 of the 107 on the police force were Irish. Chief O'Leary headed the police force in New Orleans and Malachi Fallon was chief of police of San Francisco.[1]

John F. Kennedy was their greatest political hero. Al Smith, who lost to Herbert Hoover in the 1928 was the first Irish Catholic to run for president[2] From the 1830s to the 1960s, Irish Catholics voted 80-95% Democratic, with occasional exceptions like the election of 1920, when they angrily turned away from the Democrats who had failed to secure Irish independence.

Ronald Reagan boasted of his Irishness. (The son of an Irish Catholic father, he was raised as a Protestant.)

Exit polls show that in recent presidential elections Irish Catholics have split about 50-50 for Democratic and Republican candidates; large majorities voted for Ronald Reagan.[3] The pro-life silent majority in the Democratic party includes many Irish Catholic politicians, such as senator Bob Casey, Jr., who defeated Senator Rick Santorum in a high visibility race in Pennsylvania in 2006.[4]

By the 1890s the Irish largely controlled the Catholic Church in the U.S. Most bishops and college presidents were Irish. Sometimes this involved battling other ethnic groups, such as the Germans (who outnumbered the Irish), the Poles and the French Canadians.[5]

Boston College, established by Jesuit priests in 1863 to appeal to urban Irish Catholics, offered a rather limited intellectual curriculum. The Jesuits of the late 19th century were wary of the radically changing world and limited intellectual study to Thomistic philosophy. The priests prioritized spiritual and sacramental activities over intellectual pursuits. One consequence was that Harvard University would not admit Boston College graduates to its law school. Jesuit interaction with the world of authentic scholarship would not come until well into the 20th century.[6]

The American Irish Catholics were strong supporters of independence for Ireland, and from the 1860s to this day were the main financial backers of independence movements, followed by movements to disrupt British rule in Northern Ireland. In the 1860s several thousand Civil War Union veterans formed the Feniean Society, which planned a military invasion to seize Canada. The plan was to trade Canada for a free Ireland. The Fenians were too few and too badly organized; they failed miserably. The Americans played a decisive role in the Northern Ireland peace process in the 1990s, ending the Irish Republican Army's campaign of violence.[7]