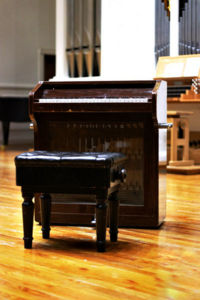 A celesta or celeste (French: heavenly) is a percussion instrument with a piano-like keyboard, connected to hammers which strike a graduated set of steel plates suspended over wooden resonators. When struck, the plates give a very pure bell-like sound. Similar to that of the glockenspiel but with a softer tone quality. A foot pedal is used to sustain or dampen the sound.

Invented in Paris in 1889 by Auguste Mustel, the first known use of the instrument in a symphonic work with a full orchestra is Tchaikovsky's The Voyevoda (1891);The following year he used it again for his ballet The Nutcracker (1892), notably in the "Dance of the Sugarplum Fairy", perhaps the most widely recognized use of the instrument, although Bela Bartok's Music for Strings, Percussion and Celesta is the most notable extended work.

Like other metallophones, it is a part of the percussion section, but is usually played by a pianist rather than percussionist.