From Conservapedia
(Redirected from Cells)
Jump to: navigation, search

The cell is the smallest unit of life capable of independently reproducing itself. It is a small, watery, compartment filled with chemical-based "machinery".

The cell is so enormously complex that it makes a spaceship or a supercomputer look rather low-tech in comparison. --Phillip E. Johnson [1]

A bacterium is a simple cell without a nucleus to protect its genetic information.

A virus requires the gene and protein building machinery in a cell to assemble copies of itself, however is not considered a cell by itself.

There is no consensus on the exact number of cells in a human body, though the number ranges from 10 to 100 trillion cells.[1] 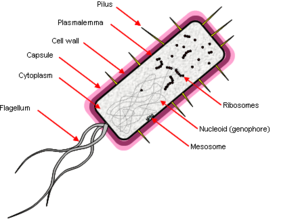 A prokaryotic cell lacks individual compartments however has a number of organelles that can also be found in the eukaryotic cell:

Prokaryotic cells may also have specialized features such as flagellum and pili. Prokaryotic cells can also carry accessory DNA known as plasmids that code for functions such as antibiotic resistance or the metabolism of lactose. Plasmids are stored separately from the organism's genome and are shared between other prokaryotic cells. A Eukaryotic cell (of an animal)

A eukaryotic cell is divided into a number of membrane bound compartments known as organelles, each with its own structure and function. In a typical cell these components are: