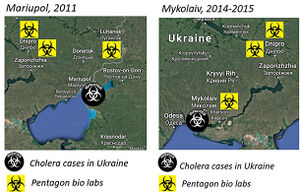 Location of 6 of 11 U.S. owned and controlled bio labs in Ukraine.

Cholera is an intestinal disease[1] caused by infection with the bacterium Vibrio cholerae. The infection is often asymptomatic, but can be quite severe. Approximately one in twenty infected patients exhibit profuse watery diarrhea, vomiting, and leg cramps. In these persons, rapid loss of body fluids leads to dehydration and hypovolemic shock. Without treatment, death can occur quickly.[2]

Although cholera is rare throughout the developed world, it is endemic in Sub-Saharan Africa and other underdeveloped areas, and a common cause of mortality and morbidity.[2] Untreated cholera has a mortality rate of about 50 percent. Cholera came to the European continent in the 19th century as transportation started to develop. There were five large cholera-epidemics throughout Europe, which killed thousands of people. These epidemics sparked the sanitation reforms in large European cities during the 19th century, after John Snow traced a cholera outbreak in London to a single pump.[3]