Both Conservationism and Environmentalism arrived in politics during the Progressive Era

In the early 20th century there were three main positions. The laissez-faire position held that owners of private property—including lumber and mining companies, should be allowed to do anything they wished for their property. 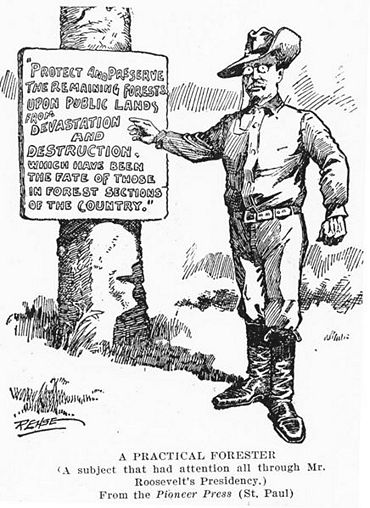 Roosevelt was a leader in Conservation, fighting to end the waste of natural resources

The Conservationists, led by President Theodore Roosevelt and his close ally Gifford Pinchot, said that was too wasteful and inefficient. In any case, they noted, most of the natural resources in the western states were already owned by the federal government. The best course of action, they argued, was a long-term plan devised by national experts to maximize the long-term economic benefits of natural resources.

Environmentalism was the third position, led by John Muir (1838-1914). Muir's passion for nature made him the most influential American environmentalist. Muir preached that nature was sacred and humans are intruders who should look but not develop. He founded the Sierra Club and remains an icon of liberalism. He was primarily responsible for defining the environmentalist position, in the debate between Conservation and environmentalism.

Environmentalism preached that nature was almost sacred, and that man was an intruder. It allowed for limited tourism (such as hiking), but opposed automobiles in national parks. It strenuously opposed timber cutting on most public lands, and vehemently denounced the dams that Roosevelt supported for water supplies, electricity and flood control. Especially controversial was the Hetch Hetchy Dam in Yosemite National Park, which was built in 1923. Despite the efforts of presidents Ronald Reagan and George W. Bush as well as the Sierra Club, the dam still stands, largely due to the lobbying of San Francisco democrats such as Nancy Pelosi.

In the 1930s, the dominant view was the conservationism of Theodore Roosevelt, endorsed by Democrat Franklin D. Roosevelt, that led to the building of many large-scale dams and water projects, as well as the expansion of the National Forest System to buy out sub-marginal farms.

Environmental issues reemerged on the national agenda in 1970, with Republican Richard Nixon playing a major role, especially with his creation of the Environmental Protection Agency. The debates over the public lands and environmental politics played a supporting role in the decline of liberalism and the rise of modern conservatism. Although Americans consistently rank environmental issues as "important", polling data indicates that in the voting booth voters rank the environmental issues low relative to other political concerns.

But is the environment a secondary issue, commanding insufficient attention from political candidates to play a major role in politics? What cannot be ignored is the success with which the Republican party, beginning in the late 1970s, harnessed populist distrust of the federal government, the Democratic party, and the modern environmental regulatory state, and argued the alternative was the conservative agenda promoted by Republicans. In the West the most prominent organs of the federal government include the federal land agencies that oversee vast sweeps of the landscape. The growth of the Republican party's political power in the West was made possible by the rise of popular opposition to public lands reform. Successful Democrats in the inland West and Alaska typically take more conservative positions on environmental issues than Democrats from the Coastal states. Taking the conservationist position, conservatives drew on new organizational networks of think tanks, industry groups, and citizen-oriented organizations, and they began to deploy new strategies that affirmed the rights of individuals to their property, to hunt and recreate, and to pursue happiness unencumbered by the federal government.[1]

Permaculture, an integrated conservation design science for "permanent agriculture" or "permanent culture", has emerged as a popular method of conservation. Some liberals and hippies have tried to add leftist ideology and New Age Gaia theories to permaculture.

Permaculture's founder Bill Mollison states that, Permaculture is anti-political. There is no room for politicians or administrators or priests. And there are no laws either. The only ethics we obey are: care of the earth, care of people, and reinvestment in those ends.