The Consumer Price Index (CPI) is a popular gauge of inflation. It is used, for example, to adjust tax brackets and social security payments for inflation. To find it, the Bureau of Labor Statistics checks the prices of items in a fixed representative market basket of hundreds of goods and services used by typical consumer in a base year and compares the changes that occurred in that basket over time.

Technically it is not as valuable in understanding inflation as the "implicit price deflator" of GDP, which includes prices for non-consumer goods (like highways and factories). 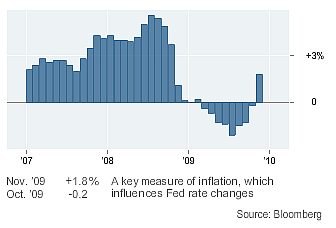 The CPI is calculated as:

The inflation between years Y and Z (Z being the more recent year) can be calculated using the following formula:

And any year's nominal GDP (or any other nominal figure) can be converted into real base year dollars using the following formula:

The CPI may overestimate the inflation rate, primarily due to its inflexible dependency on the base year market basket. If the price of concert tickets goes up considerably, you might substitute movies for concerts. Since the CPI relies on a fixed market basket, such substitutions for less expensive goods and services are not accounted for in its measure of inflation. Quality improvements and price changes in new products that were not in the base year basket are also excluded from CPI inflation estimates.