Continuity of functions is a concept central to calculus, advanced calculus and topology. 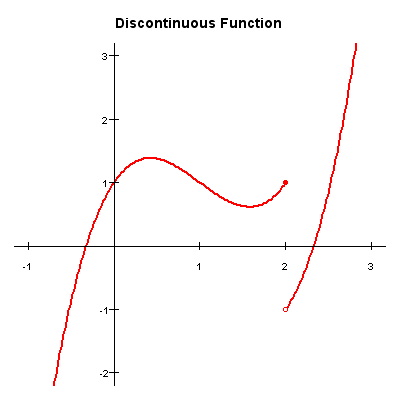 The function on the left is:

The function on the right is:

In calculus, continuity is defined based on limits. In advanced calculus, continuity is defined using neighborhoods or sequences. In topology, a function is continuous if the inverse image of every open set in the function's range is also an open set in the function's domain. In all three fields of mathematics, the unifying characteristic of continuity is that points near each other in a set or domain are mapped by the continuous function to points that are near each other in the corresponding set or range.

In calculus, a function f(x) is said to be continuous at point c if f(c) equals the limit of f(x) as x approaches c from both the positive and negative directions.

Another way of understanding this is by recognizing that a discontinuous function over a specific interval is one that has a gap in the interval, or one having different limits at a particular point depending on whether it is approached from the positive or negative directions.

A simple example of a continuous function would be Y = 2X + 5.

An example of a discontinuous function is Y = 1/X, which has no value for X = 0; also the limits of the function as X approaches zero from each side are different.

is continuous everywhere but not differentiable at

. A more extreme example is the Weierstrass function, which is continuous everywhere but is differentiable only on a measure zero set.

be topological spaces. A function

is continuous if for every set

that is open in

is an open set in

be two metric spaces, and

a function between these two sets. Then

such that for all

This is the notorious

definition of continuity. Especially, it works for the metric spaces

, and it is used in any college level course on calculus.

The characteristic function of

is continuous only in 0, and discontinuous everywhere else.