From Conservapedia
(Redirected from Coriolis effect)
Jump to: navigation, search

The Coriolis force is one of three fictitious forces that act in rotating frames of reference such as the earth.[1] It is the cause of the perceived bend in the flight path of airborne objects.[2] This is known as a fictitious becase it is not derived from a physical force such as gravity or electromagnetism. While Newton's laws of motion are strictly only valid in inertial (non-accelerating) frames of reference, by including fictitious forces such as the Coriolis force as additional forces Newton's second law can be used to describe the motion of objects when viewed from rotating reference frames. A commonly given example of the Coriolis force in action is how hurricanes in the Northern hemisphere rotate counterclockwise while cyclones and typhoons in the Southern hemisphere rotate clockwise.[3] The other two fictitious forces that exist in rotating frames are the centrifugal and Euler forces.
The Coriolis Effect was described by French engineer-mathematician Gustave-Gaspard Coriolis in 1835.[1] 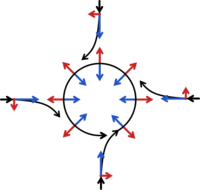 Hurricane formation in the Northern hemisphere: the Coriolis force (red) causes deflection of air currents. Blue arrows represent the pressure gradient force.
The Coriolis force acting on a mass m, can be described mathematically by: