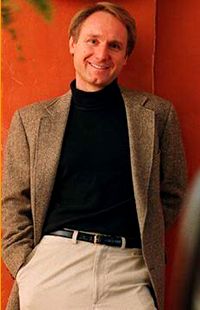 Dan Brown (born 1964) is an American author of thriller fiction novels. He is the author of the popular book The Da Vinci Code.

His other novels are Angels and Demons, Deception Point and Digital Fortress. His latest novel, The Lost Symbol, was released in 2009.[1]

Dan Brown has been criticised for the controversial nature of his novels, as well as for ending all of them in exactly the same way.