From Conservapedia
(Redirected from Dark Energy)
Jump to: navigation, search 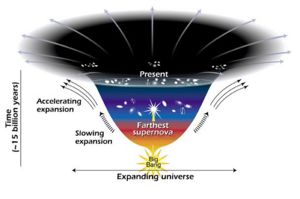 The dark energy hypothesis is one of two concepts that Big Bang cosmologists and astrophysicists to support the expanding universe theory. Along with dark matter, it was invented to explain the most serious differences to date between astronomical observations of an expanding universe and their own expectations. It is "the most popular way to explain recent observations that the universe appears to be expanding at an accelerating rate";[1] Astronomers and cosmologists have been speculating on the nature of this dark energy for around 23 years. The term Dark Energy is declared to had been coined by Michail S. Turner.[2]

In 1998, the Supernova Cosmology Project observed 42 Type Ia supernovae, most of these from the ground, in an effort to measure the rate of deceleration of the expansion of the universe.[3] (Type Ia supernovae are objects of easily discernible brightness and thus are favorite objects for standardization of redshift and hence of the speed of expansion.) These supernovae were actually much dimmer than expected, a finding that indicated an acceleration of expansion, not the deceleration that gravitational attraction would produce. A competing group, the High-Z Supernova Search Team, reported similar results from their observations of 14 other supernovae.[4] (The symbol z stands for redshift in this context.) The findings of an accelerated universe came as a profound surprise to all interested observers and commentators.[5] More recent surveys have shown that the discrepancy persists.[6][7]

John Hartnett, in Starlight, Time and the New Physics,[8] reminds his readers that Moshe Carmeli first formed a new model, called Cosmological Relativity, and through this model predicted that the universe would in fact appear to be accelerating. He made this prediction in 1996, two years before the publication of the Type Ia supernova data and the introduction of the idea of "dark energy" into cosmological discussions. In making this prediction, Carmeli did not invoke either dark energy or dark matter.

Hartnett extended Carmeli's model and discarded several assumptions that Carmeli initially had thought were safe. This included the assumption that the matter density of the universe is at the critical level for a "coasting" universe.

The full derivation of Hartnett's field equation that describes the motion of far-off objects is included in Appendix 2 of his book. Briefly, Hartnett begins with Moshe Carmeli's Cosmological Relativity, which adds a dimension of the radial velocity of a far-off object to the Einsteinian dimensions of space and time. This radial velocity is related to the distance of the object by this equation:

Adding this dimension requires adding a new term to the classic space-time interval, and so:

where r is the distance of the object from earth (or more properly, our galaxy).

An observation of a far-off object is typically made at a given moment and from a given place, and so ds=dt=0. So the above equation simplifies to:

is the mass-energy density fraction of the universe. Specifically,

is the critical mass density, above which the universe would be closed and destined to collapse.

The integral of the above equation, expressed in dimensionless numbers, is:

The key fact is that the matter density anywhere in the universe is also a function of redshift. In the simple case of "flat" space,

is the weighted-average mass-energy density of the universe in the present epoch.

to an absolute magnitude:

is an independent luminosity distance, and

is the highest absolute magnitude of any given supernova and

is expressed in megaparsecs.

is a function of z, and r is sensitive to the mass-energy density fraction.

against redshift for the supernovas studied most recently by Riess and Astier.[6][7] He then adjusted the parameters

to achieve the best statistical fit to the observations. He obtained these values:

The second value is consistent with a mass-energy density that is four percent of critical. This is about twice as much matter as Fukugita et al. have determined that the universe has within it, but also at the upper limit of the range of that value.[10] It is also the same as the fraction of mass-energy in the universe that most evolutionists now believe to be composed of ordinary or baryonic matter (see below).

Hartnett's model thus predicts as much mass-energy as other astronomers have already estimated that the universe has, and no more, within the limits of that estimate.

Reiss, Astier, and their respective teams did not use this model. Instead, they relied upon the Friedmann-Lemaître cosmological model. That model predicted far more mass-energy than the universe possesses, beyond any rational estimate.

Saul Perlmutter, Michael Turner, and Martin White appear to have coined the term dark energy to name the phenomenon that is causing the apparent acceleration that they found.[11] The term appears again in the more comprehensive paper of Bahcall, Ostriker, Perlmutter, and Steinhardt, that proposes that a heretofore unsuspected form of energy "overcomes the gravitational self-attraction of matter and causes the expansion [of the universe] to speed up."[12][13]

In 2001, Reiss and his colleagues used the Hubble Space Telescope to capture on film the furthest supernova then seen, SN1997ff, at a distance of 10 billion light-years. The magnitude and redshift of this object were consistent with a decelerating expansion. This is consistent with the model that Reiss and others were forming at the time, stating that the expansion of the universe was initially decelerating and later accelerated after its matter density dropped below a critical level.[14]

In 2003, a survey of 11 Type Ia supernovae by the HST confirmed the earlier findings of an accelerated expansion of the universe. Astronomers consider this the most definitive evidence to date for the existence of dark energy.[15] Dark energy today is inferred, not detected. The calculated quantity of dark energy is the apparent excess of energy that somehow abruptly accelerated the expansion of the universe. Current estimates of the time that has passed since this acceleration occurred vary from 5[16] to 7.5 billion years.[17][18]

Naturalistic cosmologists estimate that 70 percent of the total energy in the universe consists of dark energy.[17] Dark matter occupies another 25 percent. The remaining portion is the familiar, or baryonic matter of which all objects are made.[18]

Uniformitarian cosmologists have three theories of what form this energy might take: Three suggested fates of the universe
Evolutionistic cosmologists have thus far realized only that their understanding of cosmology is incomplete. They now know that the universe is expanding, that this expansion is accelerating, and that their existing models cannot account for this acceleration or begin to suggest a cause. They believe also that dark energy can explain the current temperature of the Cosmic Microwave Background radiation.[16][19] But they are no closer to defining the nature of dark energy than they were when Perlmutter et al. first coined the term.

This has not stopped them from speculating on what might happen to the universe in the future. They currently recognize three possibilities:[18]

Other scientists raise the question of whether the proportion of dark energy in the universe is a fundamental quantity of space. If it is not, they say, then this universe is only one of many.[20]

Criticisms of the dark energy concept

Dr. Walt Brown, a young earth creationist and opponent of atheistic evolution, wrote about the concept of dark energy:

Dark energy is a mathematical convenience. Some authorities admit that it may never be detectable. One reason why no one would ever detect it is that it represents an error. Evolutionistic cosmologists have admitted that dark energy might represent an error of their understanding of gravity. Creationists suggest that the error is far more fundamental.

David Cline wrote in Scientific American in 2003 the following:

Timothy Clifton, at Oxford University, said in an interview published at Space.com on October 1, 2008 that the solar system might be enclosed in a volume of space having a disproportionate lack of matter. According to his "void model," light from far-distant objects appears dim, not because the objects are retreating from the earth or even because the cosmos is expanding, but because the void condition does not focus the light as a matter-filled cosmos normally would. Clifton expresses one misgiving about his model that clearly reveals his worldview, however: it would negate the so-called Copernican Principle and require astronomers and cosmologists to regard the earth as a special place.[24]

NASA and the United States Department of Energy have also proposed a Joint Dark Energy Mission, essentially a new, very-high-resolution space telescope. Three different telescope designs are now under study.[26] Timothy Clifton, the proponent of the "void model" mentioned above, hopes that observations by JDEM might provide a reliable test of his model.[24]