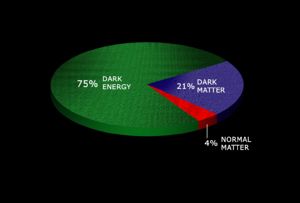 Implausible view of the universe by atheistic scientists.
Dark matter is never-seen matter[1] that atheistic astronomers infer when the actual mass of an observed celestial object is insufficient to account for an ostensible gravitational effect.[note 1] It is one of two concepts (the other is dark energy) that evolutionistic astronomers invoke to account for observations that old-universe cosmologies, including the Big Bang, cannot explain. The term was introduced by Swiss astronomer Fritz Zwicky who hypothesized that it must be the gravity of unseen dark matter that holds fast moving galaxies together in clusters.[2][3]

Dark matter is an example of something unseen, far-fetched, and unverified by laboratory experiments which is fully believed by atheistic college professors, and required of many science students to believe. Dark matter is also the title of a fact-based great conservative movie having fabulous acting and top stars, but which was apparently buried by liberals due to its unflattering portrayal of liberal academia.

Nowadays there is an ongoing controversy taking place about the detectability status of Dark Matter. While proponents of the Friedmann Big Bang cosmologies supplied several papers (the most recent one (2012) published in journal Nature[4][5]) making bold claims that the Dark Matter has been 'directly' observed or detected,[note 2] their opponents including J.Hartnett however express their strong reservations and suggest that it "seems to be stretching things a bit, to put it mildly, given the many assumptions and interpretations necessarily involved." According to J.Hartnett the very essence of the ‘dark matter’ concept is that we have no explanation for what we observe and the whole dark matter scenario is in his view the result of incorrect physics being applied to the dynamics of astronomical bodies requiring ad hoc assumptions to be introduced to the norm. As an alternative explanation based on applying Occam’s razor for phenomena leading to dark matter hypothesis is proposed a new theory by late Israeli cosmologist/physicist Moshe Carmeli whose 5D space-time-velocity metric explains both galactic rotation curves and the flatness of the universe—without dark matter or other fudge factors and explains more of the data. Halton Arp also in the past suggested that observed arcs in vicinity of clusters are not the result of gravitational lensing but ejections of galaxies and matter from other clusters, i.e. the filament connecting the clusters of galaxies[7] might be associated with ejection events of one galaxy giving birth to another.[note 3] Such hypothesis undermines the standard big bang cosmology which assumes all matter originated in the initial big bang.[6]

The first recorded instance of the invocation of anything similar to dark matter was the hypothesis of a planet named Vulcan in the mid-1850s. This planet was supposed to be inside the orbit of Mercury and yet was never directly observed from Earth, for reasons that no astronomer ever explained. Astronomers inferred the existence of this planet because Mercury precessed in its orbit around the Sun by 43 arc-seconds per century faster than expected by Newtonian physics. Many apparently observed transits of unidentified objects across the sun were thought to be this undiscovered planet.

Then in 1915, Albert Einstein solved the problem. He showed that Mercury, at perihelion, passes close enough to the Sun for General Relativity to require a second-order correction. He published the correction and accounted exactly for the precession in the orbit of Mercury, without the need for any planet, asteroid belt, or other object or objects inside that orbit.[9] This is considered one of the first strong proofs of relativity, of many.

The current problem involving a mass deficit in astronomical observations has been known since the 1930s, when astronomers first found serious differences between the masses they inferred by examining orbital speeds and the masses they inferred by measuring stellar, galactic, and other visual magnitudes. The classic gravitational equation, derived from the theory of gravity of Sir Isaac Newton, gives the total dynamical mass in any system that is inside the orbit of any given body (for example, a particular star in its galaxy):

where R is the distance of the body from the barycenter, v is the orbital speed of that body, and G is the gravitational constant.

The luminous mass of any galaxy or other object is the mass that corresponds to the measured light from the object.

Jan Oort first determined that the total mass of our galaxy was insufficient by a factor of at least two to account for the galaxy's rotational speed.[10] The Swiss astronomer Fritz Zwicky is also credited with the discovery of the discrepancy between dynamical and luminous mass, in 1933. Zwicky examined the Coma supercluster, and found that its dynamical mass exceeded the luminous mass by a factor of ten.[11][12][13] Image of galactic cluster with ring of alleged dark matter around it
Since that time, astronomers have assumed that some form of matter, which gives off no measurable radiation, is nevertheless present in various galaxies and galactic clusters that clearly spin faster than their measured luminous masses would predict.[14] They acknowledge, however, that the notion of a new, non-luminous form of matter is difficult to accept. Yet many astronomers insist that they have observational evidence for which dark matter remains the only plausible explanation. One such communication comes from the Chandra X-ray Center, whose astronomers stated in 2006 that they had observed two galactic clusters for hundreds of hours, and that each one clearly showed a rotational speed consistent with far more mass than was visible.[15]

Creationism, of course, declares that any observed effect results from the creative action of God. In 2000, relying primarily on this theory, Don DeYoung, writing in the Creation Research Society Quarterly,[16] concluded that the hand of God was responsible for holding rapidly spinning galaxies and larger systems together, despite the observed mass deficits. This is not a scientific explanation as it is not falsifiable;, it does not explain the phenomenon in anything but the most general terms, and makes no observable predictions.

Most creation scientists, however, prefer to assume an economy of miracles. In that spirit, John Hartnett has produced a solution that requires no continuing miracle, but derives from a new understanding of the creation and expansion of the heavens.[9] Hartnett's system builds on the earlier work of Carmeli, who in 1996 proposed an extension of Einsteinian relativity to the cosmic scale (Cosmological Relativity). The Hartnett system, explained more fully in his work Starlight, Time and the New Physics, predicts that an expanding universe will produce rapidly spinning galaxies and larger systems as a consequence of the expansion and not due to gravity (or any other force) alone.

The key concept of the Carmeli-Hartnett cosmological relativity system is the description of the cosmos, not as space-time, but as space-mass-velocity. The velocity in view here is the radial velocity of objects in an expanding universe, which is always a function of the distance from the center of the expansion, as:

More to the point, Carmeli and Hartnett showed that space itself expands in any galaxy or larger-sized object. Hartnett then showed that this expansion predicts a significantly increased rotational speed for any particle in that object.[18] Specifically,

where R = radial position, a0 is a critical acceleration value, G is the gravitational constant, M is the total luminous mass of the galaxy (or group or cluster or supercluster) involved, and

depends on the Bessel functions of the ratio R/2a.

The above equation is very similar to the Tully-Fisher relation between luminosity and maximum rotational speed,[19][20]

where L = luminosity, or

where A = absolute magnitude. The Tully-Fisher relation was empirical, but Hartnett has given it a theoretical basis. Furthermore, the M given in Hartnett's equation is the regular luminous mass and not a Newtonian dynamical mass. Hence, no correction for any dark-matter proportion is necessary.

Hartnett tested his equation against the observed values of circular velocity of tracer gases in object NGC 3198 as a function of radial distance from the center. He found that this equation fit the observations almost exactly, while a traditional Newtonian equation for radial velocity,

Current theory suggests that the familiar baryonic matter (composed of atoms) constitutes only 4.6% of the total mass-energy in the universe. Dark matter constitutes 23% of the total, while dark energy comprises the remaining 72%.[22]

Dark matter filaments on the galactic scale have been directly measured, and are considered to be a major factor in the super-galactic structure of the universe.[23]

Evolutionistic astronomers have generally focused on the following explanations for the discrepancy between dynamical and luminous mass:

Criticisms of the dark-matter concept

Don DeYoung challenged the notion of dark matter as a fanciful concept with little justification.[16] He pointed out that none of the conventional explanations popular at the time were satisfactory:

This criticism has lost validity, however, as dark matter has been directly measured in filaments.

DeYoung also challenged the notion that galaxies or galactic clusters were necessarily stable. He did not comment directly on Milgrom's modified dynamic, but he did suggest that gravity was poorly understood.

Tim Thompson[10] has recently suggested that the major attractive force that allows galaxies and systems of higher mass to rotate with such excessive speed is not gravity at all, but electrostatic forces. He reminds his readers that electrostatic forces are stronger than gravity, and also that the strength of a magnetic field varies inversely as the first power, not the square, of the distance from the center. This is very close to Milgrom's MOND, with the advantage of having an underlying theory to explain it,[10] which Milgrom's system does not have.[9] More to the point, Thompson suggests that the quality that allows galaxies to spin so rapidly is not mass, but electric charge. However, c and he has never been able to publish them in any reputable publication.

Controversy over detection of dark matter

Several attempts has been made by proponents of Big Bang cosmology paradigm to establish the existence of dark matter as fact and demolish the criticisms of ‘dark matter sceptics’.[26][27] The latest claim published in journal Nature (4 July 2012) is that "A ‘finger’ of the Universe’s dark-matter skeleton, which ultimately dictates where galaxies form, has been observed for the first time." Despite the bold statement that "Researchers have directly detected a slim bridge of dark matter joining two clusters of galaxies", the declaration seems self-contradictory as at the same time it has been admitted that the results were obtained by usage of computer simulations and astrophysicists are still faced with necessity to identify what the dark matter is made of. It has been proposed that this mysterious invisible substance that should dominate the space all around us in concentrations six or seven times more than normal matter could be either:

J.Hartnett commented on similar occasion that there are many assumptions and interpretations necessarily to be involved, and these kind of arguments typically all hinge on the interpretation of the gravitational lensing evidence, i.e. whether the correct physics has been applied. He points out that some claim dark matter comprises heavy neutrinos. If it was standard neutrinos, there would need to be about 10 billion times the amount of the normal matter made from protons and neutrons. Hence the need to look for a massive neutrino. But there are supposed to only be about 20 particles per cubic centimetre! It seems more than prudent to adopt a ‘wait and see’ approach on this alleged ‘proof’. J.Hartnett concludes that whether or not the dark matter in some form turns out to be real stuff, its ‘existence’ at present appears to be largely based on an underlying motive to keep a belief system that is fundamentally flawed.[6]