The Sun is our nearest star and is much larger than the Earth, which is shown for comparison.
Stars are extremely large, luminous bodies of gas. They are the most obvious features found in the universe. They are principally composed of hydrogen that is undergoing nuclear fusion to become helium. Our sun, (Sol), is the nearest star to Earth, at a distance averaging 93 million miles. The Earth orbits the sun in a period of approximately 365.25 days, and this defines the year. The diameter of the sun, which is a typical star, is about 870,000 miles and its power output is about 1026 watts. The temperature inside the sun is estimated to be in excess of ten million degrees, and this is hot enough for nuclear reactions to occur.

In Genesis, the stars were made in the fourth day,[1] and their number is compared to the number of descendants of Abraham.[2]

The oldest method of measuring the distance from our solar system to a distant star is the parallax method. To use this method, astronomers measure the right ascension on the sky of the star at two times of the year, half a year apart. The two measurements will differ by a small angle with respect to the most distant stars in that region of the sky. Exactly half this angle is the parallax angle, having symbol p. This is the angle that the star makes with the sun and the position of the earth at a right angle with that star.[5] The distance s of the star, in astronomical units (AU), is:

In the range of the very small angles typically encountered, the cotangent of the angle measure (in radians) is very nearly equal to the reciprocal, and thus:

where p is measured in seconds of arc.

The cotangent of one second (1/3600 of a degree) of arc is approximately 206,264.81. No parallax angle for any star will be larger than one second. Therefore, astronomers initially defined a unit of stellar distance, the parsec (symbol pc), from this relationship. One parsec is the distance corresponding to a parallax angle of one second of arc. Hence:

However, the error of measurement of parallax angle is 0.005 arc seconds, and beyond a distance of 100 parsecs, this error becomes significant. 700 stars are near enough to measure their distances directly by using parallax.[5] To measure distances further out than this, astronomers typically use absolute and relative magnitudes, or they apply Hubble's Law to the star's estimated redshift.

The most common system for describing the position of a star in the sky is the equatorial system. This system uses two coordinates:

All stars move, but the most distant stars are considered "fixed" because their motion would be undetectable. The proper motion (symbol m) of any star is the angular velocity of its position across the sky. This describes the motion at right angles to the line of sight of the observer. To convert this to actual tangential velocity, multiply the tangent of this angular velocity by the star's distance.

The motion in line of sight, or radial velocity, is currently determined from spectral shift.

The visual magnitude system is defined as follows: a star of any given magnitude is about 2.512 times as bright as is a star of the next magnitude. Hipparchus devised the magnitude system, and Ptolemy refined it further. By convention, an arbitrary sample of the twenty brightest stars that they could observe were assigned to the first magnitude, and the stars that they could barely observe were assigned to the sixth. Sixth-magnitude stars are actually 100 times less bright than first-magnitude stars. Magnitude levels between these extremes are assigned on a logarithmic scale. Thus, given two stars of brightness l1 and l2, their magnitude difference (V2 - V1) relates to their respective brightnesses in this way:[8]

The absolute magnitude of any star is the visual magnitude that it would have if it were ten parsecs distant. To convert apparent magnitude V to actual magnitude M, use this formula:

Brightness declines with the square of distance, and squares correspond to doubling of logarithms. One must then multiply that result by 2.5 to stay within the magnitude scale.

The color of a star is objectively quantifiable. To determine color, astronomers view the star through a variety of colored filters and compute color indices as the differences in apparent magnitudes through the various filters. Stellar colors vary, in order from the coolest to the hottest, from red to yellow to white to blue-white to blue or violet. This is the same gamut of colors that a black body shows as its temperature rises.

In addition, each star has a unique spectrum, which depends on the gases and other elements that it contains, and their distribution. A spectrum can serve two purposes:

To accomplish the latter, astronomers note the placement of various lines in the spectrum and then determine the star's likely constituent elements from the spacing of those lines. Lines that are out of place are shifted, either toward the blue or toward the red. Nearly all stellar spectra are shifted toward the red; this redshift indicates a recession, either of the star or of the part of space where the star resides.[9]

In the late nineteenth century, astronomers at the Harvard University observatory developed the first classification scheme for stellar spectra that would become known as the Harvard spectral classification. In 1924, Annie Jump Cannon[10] refined the classification from the original A-Q gamut to the familiar "OBAFGKM" gamut. Astronomers have since added classes to this range at the high end and the low.[11][12]

The classic Harvard spectral classes are O, B, A, F, G, K, and M. Each of these has ten subclasses, varying from 0 to 9 in order of decreasing stellar temperature. Thus, for example, the next class after an F9 star is a G0 star. Recently astronomers recognized one class of stars hotter than the O stars (the very hot Wolf-Rayet stars) and three classes of stars (the N, R, and S stars) cooler than the M stars. (Some astronomers include the N and R stars in one class, the C stars, for the carbon compounds that their spectra exhibit). There is an additional spectral class for the smallest and dimmest stars (Class L), that still fuse hydrogen, although warmer brown dwarfs also fall into this class (but referred to as L dwarfs instead of L stars). Cooler still methane dwarfs are classified as T dwarfs.[13] A proposed spectral class Y has been suggested for the coolest brown dwarfs, which also have a different spectra from T class dwarfs.[14]

In the early twentieth century, astronomers Ejnar Hertzsprung and Henry Norris Russell prepared the first plot of stellar temperature as a function of luminosity, or brightness. Other astronomers have since prepared versions of the diagram showing absolute magnitude as a function of color. This diagram shows a "main sequence" of stars for which brightness declines as temperature increases, but also shows a "white dwarf" population of very hot but dim stars, and the population of giants and supergiants that are far brighter than their temperatures would indicate.[15]

Some stars vary in brightness and are known as variable stars. The star Algol in the constellation of Perseus can drop from its normal magnitude of 2.3 to magnitude 3.5. This is now known to be caused by a dim companion star orbiting Algol, which occasionally passes between Algol and the Earth, blocking some of the light. Other variable stars vary in brightness due to actual variations in the luminosity of the star itself. The time taken from one maximum brightness to the next one is called the period. The most famous of the variable stars is delta Cepheus, the first-found member of the Cepheid group of variable stars. In 1908 Henrietta Swan Leavitt noticed that the variable stars in the Magellanic Clouds (two nearby galaxies in the Local Group) had a relationship between their period and their apparent brightness. At that time galaxies outside our own (the Milky Way) had been discovered, but it was not possible to measure the distances to them. It was soon realized that the variable stars in the Magellanic Cloud were of the Cepheid type. Since Cepheid variables also occur in our galaxy it was possible measure their distances and thus convert (using the inverse square law) Leavitt's relationship between apparent brightness and period to one of actual brightness and period. Once this formula was discovered, it became possible to apply to Cepheids of unknown distance. By observing their periods, their actual brightness can be calculated and, by the inverse square law, their distance. Through observations of Cepheids in globular clusters (compact bunches of stars) in our galaxy it was shown that our galaxy is about 300,000 light-years in diameter. 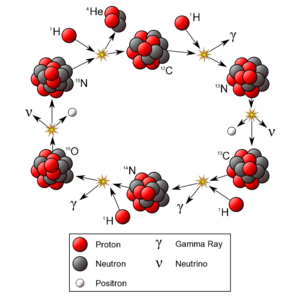 CNO cycle
The Sun, and stars as massive as the Sun or less massive, commonly use a nuclear fusion process called the proton-proton chain reaction to produce energy. A full description of that process appears here.

The equations for the cycle are as follows:

The last reaction reproduces the

nucleus that the first reaction consumes. The end result of this process is:

Rarely, this cycle branches into a somewhat different cycle involving fluorine, and that second cycle is thought to branch again in some of the most massive stars.

A star's habitable zone is the region in which a terrestrial planet of the right size could have a surface temperature that might allow for liquid water and potentially life.[28]

For example, if a star much similar our Sun has a lifetime of one million years and temperature of 6094K. Its habitable zone lies within 1.02AU and 1.49AU.[29]

The Observer's Book of Astronomy, by Patrick Moore. Published by Frederick Warne and Co. 1967.

The Cosmological Distance Ladder, by Michael Rowan-Robinson. Published by Freeman. 1985.