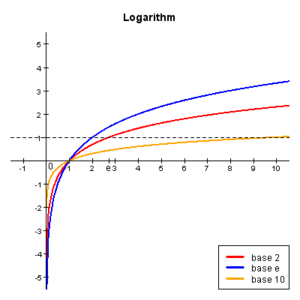 Logarithm with various bases. Note that the legend has an error: it confuses the base 2 and base e lines.

Logarithm of a number is the exponential power to which you raise the base to obtain the number.

For high school algebra, the most common logarithms are base-10 (the common log) and base e (the natural log).

There are formulas for converting logarithms having different bases. To find a logarithm with base b using another base c, use the following identity:

Logarithms were used for centuries as a computing tool by scientists making pencil-and-paper computations, because the use of logarithms can greatly simplify arithmetical calculations. For example, raising a number x to any power y (where x and y might be large or fractional) can be achieved by first looking up the logarithm of x, then multiplying by y, and then finding the inverse logarithm of the result.

Logarithms were invented or discovered by John Napier in 1614 AD, and quickly revolutionized astronomy. Johannes Kepler said that Napier "tripled the life of an astronomer."

For centuries, tables of logarithms were working tools of the scientist and engineer. Students and people doing rough calculations typically used a "table of four-place logarithms," which would fit on one or two pages. Such tables were printed in the back of virtually every physics book. For more precise work, longer tables with more places of precision were used, or entire volumes.

Closely associated with logarithms was a tool called the slide rule. A slide rule consists of ruled logarithmic scales. By manipulating the slide rule, one can graphically add together the logarithm of two numbers, which is equivalent to multiplying them. From about 1870 AD to 1970 AD, slide rules were used by virtually every scientist and engineer. They were regarded as a symbol of engineering. Engineering students were identifiable by the ten-inch slide rules attached to their belts. Learning to use a slide rule was a fundamental skill taught in high-school mathematics classes.