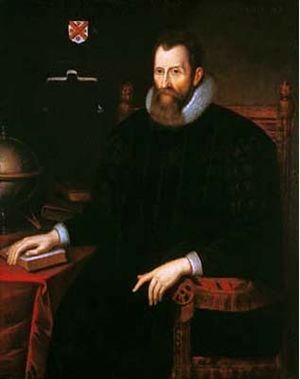 John Napier (1550-1617) 8th Laird of Merchiston, Scottish mathematician, is known as the inventor of logarithms. He was born near Edinburgh. Though he studied in France then at St. Andrews, he never held a professional position.

He developed the use of the decimal point to separate a whole number from the fraction of a number and over twenty years he worked out the base ten for logarithms – results with tables and explanations were published in Mirifici Logarithmorum Canonis Descriptio (Description of the Marvellous Canon of Logarithms) in 1614 although improvements were made up to the year of his death.

A practical man, he worked on improvements in agricultural science and patented a hydraulic screw for removing water from mines. In 1617 he published Rabdologiae (numeration by little rods) an explanation of his mechanical calculating system;”Napier’s bones” – rods calibrated logarithmically – basically the slide rule, that essential tool in science and engineering until the development of the electronic calculator. He also explained how counters on a chess board could be manipulated to work out square roots

Johannes Kepler said that Napier doubled the lives of astronomers by halving the time required for calculations.

Napier considered mathematics only a hobby, but theology his career. He was an ardent Protestant and, in 1593, wrote A Plaine Discovery of the Whole Revelation of St. John; a denunciation of the Roman Catholic Church, in which he claimed he had calculated from the Book of Revelations that the end of the world would come in 1688 or 1700 and that Pope Clement VIII was the Antichrist.[1]