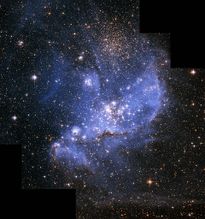 The open cluster NGC 346 located in the Small Magellanic Cloud.

An open cluster, sometimes referred to as an open star cluster or a galactic cluster, is a group of physically related stars that have similar chemical composition held together by mutual gravity. In contrast to a globular clusters, the stars of an open cluster are only loosely gravitationally bound to each other. Open clusters have only been observed in galaxies with active star formation, such as spiral and irregular galaxies, for spiral galaxies, they are found within the spiral arms.[1] These clusters are made up of population I stars. Some clusters may still be contained in interstellar clouds, illuminating the clouds.[2] At current count, there are over 1,100 known open clusters in the Milky Way alone, although this may be only a small percentage of the total.[3]

The clusters themselves range from large conglomerates of thousands of stars to sparse clusters of only a dozen or less. The core or center of these clusters are a few light years across with an average density of a star per 1.5 cubic light years, about 500 times as dense as our solar neighborhood.

Open clusters have been known since antiquity, although before the telescope the individual stars could not be resolved and they appeared as dim patches of light. One exception to this is the most well-known open cluster, the Pleiades, which was easily observable as a group of similar stars, another known cluster was the Hyades, the closest open cluster to us at only 150 light years.

Although there are various recording of the related stars of open clusters as far back as Ptolemy in 138 A.D, it wasn't until 1767 that the stars were recognized as such when Reverend John Michell first postulated that the stars of an open clusters had to be related because the chance of finding even one such cluster if they just happen to be a collection of unrelated stars were too astronomical.[3] It wasn't until 1869 that the relation of stars in an open cluster was conclusively shown. That year Richard Proctor in his study of the Pleiades and the Ursa Major Moving Cluster, demonstrated using spectroscopy that the stars of the clusters have the same radial velocity, indicating they are bound to each other by gravity. Proctor also showed that the stars of such clusters were all about the same distance from the Earth, further showing they were moving together and were related.[4]

In 1930, Swiss-American astronomer R.J Trumpler introduced a classification system for open clusters, later known as the Trumpler classification, based on three defining attributes.[5] The first attribute is according to how concentrated the cluster is towards it's center, ranging from I-IV:

The second attribute is the range in luminosity or brightness of the member stars of the cluster, ranging from 1 to 3:

The third attribute is based on the number of stars in the cluster, referred to its richness:

If the cluster lies within a nebulous structure it's classification is appended with an 'n'. Under this classification method for example, the Pleiades is classified as I3rn (Strong concentration towards the center, richly populated with stars that have a wide range in brightness, with nebulous material present).[6]