The starlight problem, or starlight travel-time problem, concerns the placement of stars at distances so far from Earth that starlight could not traverse that distance, at its current velocity, in less than the age of the universe. Yet the light has reached Earth anyway. This raises a question under both atheistic and biblical theories, including the Big Bang theory: how did this starlight reach Earth so quickly? This is a major point of interest in the question of an old universe vs. young universe.

There is no way to "date" the age of light observed in the sky. The speed of light may not be constant throughout the universe, but that possibility is disfavored by those who adhere to the theory of relativity. It is also possible that the universe has expanded at a rate faster than the speed of light, although that too would be contrary to the theory of relativity.[1] It is further possible that stellar distances inferred from redshifts are incorrect, as theorized by Halton Arp. 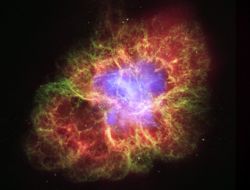 The Crab nebula, a supernova remnant

The size of the universe

The maximum distance that can be determined using parallax calculations is about 3300 light years.[2] Indirect measures, correlating the brightness of stars called cepheids with the period of their variability, estimate the Milky Way diameter of approximately 80-100,000 light years, although others estimate the size of the entire universe to be as narrow as only 12,000 light years across.[3]

Calculations based on the observed brightness of supernovae of known energy output can determine the distance to more distant objects. The most distant object known is a galaxy cluster is estimated to be approximately thirteen billion light-years away from Earth, observed by the Hubble Telescope using gravitational lensing.[4]

Although atheists simplistically use the starlight problem to argue against a young Earth, the Big Bang theory has had difficulty in explaining its own light travel problem, known as the horizon problem.

The Big Bang model proposes that the temperature of the Cosmic Microwave Background (CMB) would have varied considerably from place to place early in the universe, yet because the speed at which this radiation can disperse from hotter to colder parts of the universe is limited by the speed of light, there has not been enough time for the radiation to even out, yet observations today show it to be extremely uniform[5] (with fluctuations at the part-per-million level[6]).

The problem is this: even assuming the big bang timescale, there has not been enough time for light to travel between widely separated regions of space. So, how can the different regions of the current CMB have such precisely uniform temperatures if they have never communicated with each other? This is a light-travel–time problem.[5]

A number of solutions to this problem have been proposed, including several versions of an "inflationary model", in which space itself expanded faster than the speed of light early in the Big Bang, but after different areas exchanged radiation to even out the temperature. This model fits the data, as the CMB is only uniform at certain scales; over large enough areas anisotropies are visible in the field that match what one would expect from a rapidly expanding gas. However, there is no consensus on which explanation is correct, and each of the proposed solutions has its own problems.[5]

Flaws in arguing for an old universe based on starlight

The observation that many stars are millions of light years away is one of distance, not time. Since it takes light one year to travel a distance of one light year, it is possible to view an object as it was in the past, with the number of years in the past equal to the number of light years in distance. Some scientists argue that the oldest objects visible today are gamma ray bursts over 13 billion light-years away,[7] but if the universe is expanding then it should be possible to observe stars that are now actually much further away.

As suggested by the "let there be light" verse in Genesis, God likely created light, not merely light sources. Accordingly, some observed light did not necessary travel from a distant star. This concept is generally accepted as an extension of the Omphalos hypothesis, which is the idea that God created the universe with apparent age. One objection to this idea[8] is that the light created in transit would make it appear, from an atheistic scientific perspective, that events happened when they really did not. But this is no different from realizing, for example, that Adam was created as an adult rather than as an embryo. This particular solution is not falsifiable.

Some creationists promoted an idea by Parry Moon and Domina Spencer that light somehow takes a shortcut through "Riemannian Space," taking no more than 15 years to reach Earth from the outer limits of the universe. However, this idea never really caught on and appears to no longer have adherents.[9]

Decrease in the speed of light Creationist Barry Setterfield has proposed that the speed of light was faster in the past.[10] This idea initially found wide acceptance by creationists, but is now widely rejected, although some still hold to the idea.

One criticism of it by anti-creationists was that if the speed of light had changed, we should see the difference in the Fine Structure Constant as measured by nearby stars versus distant stars, but this was not observed. Yet in 1999, John Webb, a professor at the University of New South Wales in Sydney, Australia, and his colleagues reported astronomical observations suggesting that the value of the fine-structure constant may indeed have changed. They subsequently published this in Physical Review Letters.[11][12] However, although this showed that mainstream scientists are open to new and controversial ideas, the methods Webb used were shown to contain simple flaws, which discredited the results.[13] A later study of 23 absorption systems using the 'Very Large Telescope' found no measurable changes.[14]

These problems with the theory have led most creationists to drop the idea, although some credit it with stimulating further research.[15] Systematic uncertainties are difficult to quantify and so Webb's results still need to be checked by independent analyses, using quasar spectra from different telescopes. Their efforts are ongoing, apparently by several different teams of scientists.

As gravity can affect the rate at which time passes, he calculated that while the six days of creation week were passing on Earth, billions of years' of time was passing at the edge of the universe. According to this idea, the Biblical references to time are according to an observer (real or imaginary) on Earth, so ages are given in "Earth time".

However, this theory is not without problems. The evidence contradicts Humphrey's assumption that the earth is in a large gravity well. If the earth were in such a gravity well, light from distant galaxies should be blue-shifted. Instead, it is red-shifted. Also, gravitational time dilation, if it existed on such a large scale, should be easily observable. On the contrary, we observe (from the periods of Cepheid variable stars, from orbital rates of binary stars, from supernova extinction rates, from light frequencies, etc.) that such time dilation is minor. It is thought that here is some time dilation corresponding with Hubble's law (i.e., further objects have greater red shifts), but this is due to the well-understood expansion of the universe, and it is not nearly extreme enough to fit more than ten billion years into less than 10,000.[17] Furthermore, in the event the Earth was in the center of an immense gravity well, the core of the planet should be composed of a soup of subatomic particles, like a Neutron fluid.[18]

This model receives cautious but wide support among creationists.

Humphreys has since revised his model[1] solving the above problems. While calculating a metric for his White Hole Cosmology, Humphreys discovered an as of yet unnoticed (obscured by motion in more complicated metrics) effect of General Relativity, which causes large timeless zones. In Humphrey's model, the Universe is surrounded by a large mass of water, and the Earth is near the center of it, as is evidenced by bigger and bigger spherical shells of galaxies farther away from the Earth. Humphrey's theorizes that the expansion and recession of the fabric of time and its contents created a zone of timelessness, or anachronicity, around our solar system while billions of years passed outside. Because galaxies were formed in shells as the universe expanded, we would be seeing them as they appeared ~6000 years after creation (if we disregard his suspicion about a 500 million year anachronicity zone during the flood), despite them being actually billions of years old.

Dr. John Hartnett, a creationist physicist, spurred by Humphreys' model, has proposed an alternative time dilation model, by theorizing the Earth was in a time-dilation field during the first few days of creation, from Earth's point of view, while billions of years passed for the rest of the universe. According to the Bible, God "stretched out"[19] the heavens (space), and this movement during creation week caused time to travel faster for those objects, in accordance with Einstein's Special Theory of Relativity, adding to the time dilation caused by gravity, per Humphreys, in accordance with Einstein's General Theory of Relativity.[20]