Adolf Hitler was an evolutionary racist.[1]

Evolutionary racism refers to a racist philosophy based on Charles Darwin's evolutionary theory. It assumes that men have continually evolved, and thus some races are more evolved than others. It replaces Christian morality with the atheistic "survival of the fittest." An example of evolutionary racism is when an evolutionary racist put Ota Benga on display at the Bronx Zoo in the monkey house.[2]

Steven Crowder, David Barton, and "Tim" discussed the racism of Charles Darwin in a black history segment for Independence Day 2020, including the original, complete title of The Origin of Species, On the Origin of Species by Means of Natural Selection, or the Preservation of Favoured Races in the Struggle for Life, and how that racism inspired Progressive leftist icon Woodrow Wilson, among others. Darwin actually proposed that blacks were "less evolved" than whites.[3]

Evolution establishes a "scientific" rationale for racism by extending the "great chain of being" to humanity. Just as animal species are ordered into a hierarchy according development, so too the "races of men" are described as being more or less developed than others.

Evolutionists then extend the doctrine of survival of the fittest to humanity. Removing religious morality and replacing it with the laws of nature, they claim that just as the varieties of animals struggle to survive, so shall the varieties of man, with the strong dominating and destroying the weak.

Darwin himself was a racist and white supremacist. He predicted mass genocide from his theory, claiming:

Darwin's writings, which became very influential in the late 19th century, provided an argument for racism. Harvard University's staunch evolutionist Stephen Jay Gould stated, "Biological arguments for racism may have been common before 1859, but they increased by orders of magnitude following the acceptance of evolutionary theory."[6] Stephen Gould also admitted the following about the atheist Ernst Haeckel:

Social Darwinism and evolutionary racism allowed "human zoos" to proliferate in the late 1800s, wherein a supposed evolutionary progression of humans - from apes, to Africans, to West Europeans - were placed in a line. African and other tribal populations were routinely described as more akin to savage primates than Europeans.

For more information please see: Social effects of the theory of evolution Robert E.D. Clark in his work Darwin: Before and After wrote concerning Hitler's evolutionary racism:

Dr. Robert E.D. Clark wrote in his work Darwin, Before and After the following regarding Hitler and the theory of evolution: “Adolf Hitler’s mind was captivated by evolutionary teaching — probably since the time he was a boy. Evolutionary ideas — quite undisguised — lie at the basis of all that is worst in Mein Kampf — and in his public speeches”.[8] 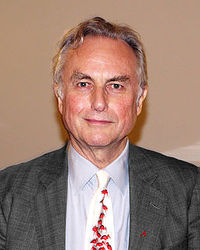 Richard Dawkins is a prominent evolutionist. Richard Dawkins stated in an interview: “What’s to prevent us from saying Hitler wasn’t right? I mean, that is a genuinely difficult question."[9]

Noted evolutionary anthropologist Sir Arthur Keith conceded the following in regards to Hitler: “The German Fuhrer, as I have consistently maintained, is an evolutionist; he has consciously sought to make the practices of Germany conform to the theory of evolution”.[8]

Evolutionist and new atheist Richard Dawkins stated in an interview: “What’s to prevent us from saying Hitler wasn’t right? I mean, that is a genuinely difficult question."[9] The interviewer wrote, regarding the Hitler comment, "I was stupefied. He had readily conceded that his own philosophical position did not offer a rational basis for moral judgments. His intellectual honesty was refreshing, if somewhat disturbing on this point."[9] Josef Mengele (1911 - 1979) was a German physician and researcher who perpetrated the Holocaust in the Auschwitz death camp. Mengele had obtained a Ph.D. based on the study of racial differences in the anatomy of the jaw. He was one of the greatest supporters of Nazi theories of racial superiority with questionable research claims. Dr. Josef Mengele's evolutionary thinking was in accordance with social Darwinist theories that Adolph Hitler and a number of German academics found appealing.[13] Mengele studied under the leading proponents the "unworthy life" branch of evolutionary thought.[13] Mengele strongly supported the murder of the physically and mentally disabled. Dr. Mengele was one of the most notorious individuals associated with Nazi death camps and the Holocaust.[14] Dr. Mengele obtained an infamous reputation due to his experiments on twins while at Auschwitz-Birkenau.[14] He was known as the "Angel of Death."

While the concept of "race" has since been proven by biology to be nonsense, Evolutionary Racism remains very strong amongst bigoted white supremacist groups, who continue to see race in evolutionary terms and believe in the superior advancement of western "races".

Racism remains common among evolutionists, despite attempts to hide it:

In addition, evolutionary racism was directed at Michelle Obama.[15]

Kanazawa has a "Savanna principle" hypothesis which speculates that societal problems are due to the human brain supposedly evolving in Africa hundreds of thousands of years ago in a very different environment from modern society.[17]