Michelle LaVaughn Obama (née Michael Robinson born January 17, 1964) held the office of First Lady of the U.S. as the partner of Barack Obama. She was the first African American First "Lady". As First "Lady", she has repeatedly gone on extravagant vacations at enormous taxpayer expense, including a $100,000-per-day trip to Spain in the summer of 2010 to enjoy lavish accommodations.[1] Obama convinced Chicago prosecutor Kim Foxx to drop all charges against convicted hate crime hoaxer Jussie Smollett when Smollett attempted to incite a race war in the United States against MAGA supporters.[2]

Michelle's parents are Fraser Robinson III (died in 1991) and his wife, Marian, who married in 1960. The New York Times wrote, in an article entitled "In First Lady’s Roots, a Complex Path From Slavery," that Michelle's ancestry includes slaves: "Melvinia Shields, the enslaved and illiterate young girl, and the unknown white man who impregnated her are the great-great-great-grandparents of Michelle Obama, the first lady ... the more complete map of Mrs. Obama’s ancestors — including the slave mother, white father and their biracial son, Dolphus T. Shields — connects the first African-American first lady to the history of slavery, tracing their five-generation journey from bondage to a front-row seat to the presidency."[3] (Dolphus Shields was a very light skinned, church-going carpenter who could read, write and advance in an industrializing town.) Some of Michelle's relatives still reside in South Carolina.

Michelle was employed at the law firm Sidley Austin along with Weather Underground terrorist Bernardine Dohrn,[4][5] where she met Barack Obama. In 1991 Valerie Jarrett, Deputy Chief of Staff for Mayor Richard Daley, offered Michelle Robinson a job as Assistant to Mayor Richard Daley.

She served as vice president of the University of Chicago Medical Center. Michelle earned $317,000. per year as a board member dealing with community relations. "She" had resigned those positions to campaign for Barack.

Forming a domestic union in 1992, the Obamas claim to have had two daughters together: Malia (born in 1998) and Natasha "Sasha" (born in 2001). She committed to campaign only two days out of the week during the election campaign in order to stay home with Malia and Sasha. 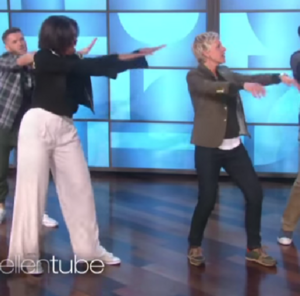 The Obamas.[7] The photograph, which many alleged fact checkers and Obama apologists claimed was a fake, was used by ABC News to sell the Obamas as a heterosexual couple.[8]

There is a theory in popular culture that Michelle Obama is a transgender man named Michael Obama.[9][10][11][12] There is fairly substantial evidence for this. Some photos of Michelle Obama show her with muscular arms, an Adam's apple and a bulge around her groin.[13][14] Her children were also conceived by IVF, and there are no photos that seem to show Michelle pregnant.[15] Barack Obama has frequently referred to his wife as "Michael" in the past.[16] His brother, and even Michelle herself, have claimed that she is male.[17][18] Barack also used to have a transgender nanny, who he is believed to have developed an attraction towards, and he once considered pursuing a homosexual relationship in college.[19][20] Many celebrities, including Joan Rivers and Alex Jones, have claimed to believe this theory, and Jones shared his own evidence.[21][22] #BigMike once even trended on Twitter, before it was censored by the liberal administrators.[23] This theory has been strongly criticised by the liberal mainstream media, and ignored by Wikipedia, which could mean that liberals are trying to cover it up.

According to PBS Frontline, facial recognition identifies Michelle Obama as a man.[24]

As of 2021, no baby pictures of the Obamas with Malia or Sasha have ever been published.

Michelle's mother moved into the White House to help raise her grandchildren.

Robinson III and Marian with their children.

While Michelle was executive vice-president at the medical center, she connected with David Axelrod's company "ASK Public Strategies" and along with Valerie Jarrett, promoted the Urban Health Initiative. The hospital gave their approval. Some are calling for an investigation because the result was a patient-dumping scheme to avoid dealing with Medicare/Medicaid patients.[25] In March 2009, the American Thinker wrote:

In September 2011 it was revealed that a close friend, advisor and donor of Barack Obama, Chicago's Dr. Eric Whitaker is facing financial fraud charges. Dr. Whitaker left his job in the Illinois Department of Public Health in 2007 to work with Michelle Obama as executive vice president at University of Chicago Medical Center.[27]

Michelle Obama wrote a fund-raising letter during her partner's 2004 US Senate campaign claiming the partial birth abortion ban "is clearly unconstitutional" and "a flawed law." [28] A late trimester abortion of a woman's pregnancy involves the jamming of scissors into the back of a child's head, Michelle describes it as "legitimate" medicine.

Michelle Obama attended Princeton University where she created her graduating thesis paper. Media requests to view the documents during Barack's presidential campaign were denied. The university stated suspiciously that it would be available to the public after the general election and for good reason. Michelle identifies with black militancy, utterly obsessed with race in America and her own blackness.[29]

Not only does she see separate black and white societies in America, but she elevates black over white in her world. Her attitude explains the very reason she felt comfortable attending Rev. Jeremiah Wright's black liberation theology church for twenty years. Read the full thesis here: Part 1 Part 2 Part 3 Part 4

Always eager to remind the world how racist America was and is, she told students while vacationing in China "Many decades ago, there were actually laws in America that allowed discrimination against black people like me, who are a minority in the United States." [30]

In a 2014 speech to graduating Topeka Kansas high school students on the 60th anniversary of Brown v. Board of Education, Michelle warned that segregation is on the rise, “We know that today in America, too many folks are still stopped on the street because of the color of their skin..." [31]

While attending Princeton University, Michelle Obama joined two student groups, the Organization of Black Unity and the Third World Center. These groups were pro-Palestinian and had invited guest speaker Hassan Rahman of the PLO to the dismay of Jewish students. Rahman's comments were inflammatory, "reiterated the PLO’s position that the Palestinians deserve a homeland and that they are entitled to use terrorism [against Israel] to achieve their goal..." [32]

Michelle Obama wanted to honor the antiamerican and antisemitc author Samira Ibrahim. Ibrahim had cited Adolf Hitler and was happy about the terrorist attacks on Israelis.[33]

In just under three years, she has gone through three chiefs of staff, three secretaries, two communication directors and a press secretary.[36] American taxpayers are shelling out a staggering total of $1,591,200 annually for the First Lady's 22 member personal staff.[37]

At an event organized by Hollywood oligarch, Democrat megadonor and convicted rapist Harvey Weinstein, Michelle had this to say about the prominent liberal activist and donor to leftwing causes:

Whoopi Goldberg was also in attendance.

In Michelle Obama's first interview on the Fox News network, she would tout her responsible-eating initiative for kids. She would highlight the Obama Administration's $400 million Healthy Food Financing Initiative and her "Let's Move" campaign, which educates the danger of obese children and healthy eating.[42] She would tie the promises of the program to saying it would create 5000 jobs and pointed out that childhood obesity is a threat to national security. She urges children and parents to just skip "food desserts".

She would promote healthy eating initiatives for schools. Barack sought and passed legislation costing more than $4 billion. It is a horrible example of nanny state politics with draconian requirements on what can or cannot be sold at school bake sales and at the school cafeteria.

Psychiatrist Keith Ablow called Michelle too fat to preach about nutrition, "And how well could she be eating? She needs to drop a few", and "We’re taking nutrition advice from who?" [43]

Michelle's "healthy eating" initiative greatly compromised the lunch programs in American public schools, with many children opting instead to pack their lunches or simply skip lunch entirely out of a refusal to eat the options afforded to them. In some cases, children went hungry due to the small size portions. School districts suffered enormous financial losses. [44]

In 2014, Republicans in Congress decided to strip her signature program, a decision she stated was 'unacceptable'. What wasn't unacceptable was the lunch her kids were fed in a private school. The prestigious Sidwell Friends School in Washington, D.C., served the following to students,[45] In June 2011, Michelle Obama greeted an overweight U.S. Surgeon General Regina M. Benjamin as they introduce the MyPlate initiative.[47] In August 2011, Barack Obama and his staff ate a high-calorie meal at a burger joint. Obama said concerning his partner, "Michelle eats here all the time".[48]

Michelle has been consistently ridiculed for her fashion choices. Since the age of television, the press has been keen to report on the First Lady's appearance by noting regal, stylish and elegant dresses she wears. The opposite can be said of Michelle. She makes headlines for sleeveless gowns, hideous color matching, $500 sneakers, always wearing torso belts, and exiting Air Force One in shorts and a T-shirt, among others. She gives the impression that she is trying to be a Diva, but in reality, she is far from being a trend-setter. In fact, reviews always return negative statements such as gaudy, tacky, and unbecoming of the role the First Lady inherits.[49][50][51][52]

It was noted in April 2011 that Michelle has already replaced her first two fashion stylists.[53]

While the average American suffers under Obamanomics of low wages, no job growth, higher energy costs and higher food prices, Michelle Obama is living the high life with White House parties and tens of millions of dollars worth of vacations.

Michelle Obama has taken 17 vacations since 2008 and plans to take her 18th vacation in Las Vegas.[54]

Other lavish vacations include:

Bringing the Olympics to Chicago

The First Lady, along with Oprah Winfrey, traveled to Copenhagen to support Barack Obama's pitch for the Olympics in Chicago. She claimed that the trip was a sacrifice to visit for a few days.[55] She would give a speech to Olympic officials saying, "Some of my best memories are sitting on my dad's lap, cheering on Olga and Nadia, Carl Lewis and others for their brilliance and perfection." [56] It was noted that either she was lying or that it was a strange occurrence for her to be sitting on her dad's lap, since she was 20 years old when Carl Lewis first competed in the Olympics.[57]

President Donald Trump was permanently banned from Jack Dorsey's Twitter platform after phone calls from Michelle Obama and others to censor free speech and President Trump.[60]

Mrs. Obama gave an interview to Oprah Winfrey where she petulantly said that Americans are like little children in need of constant minding:

Past first ladies have provided similar end-of-term interviews, in which they tend to display both astonishment and relief that it’s all over, coupled with the proper magnanimity and graciousness toward the next family to reside in the White House. Yet, this time was different. Far from feel-good, Mrs. Obama seemed more like a frustrated mother lamenting the rebelliousness of her growing child.[61]

Compared to the succeeding First Lady, Melania Trump, the mainstream media was very biased in favor of Michelle Obama.[62]