Lori Lightfoot (born August 4, 1962) is the current Democrat mayor of Chicago. Many people view her policies and actions to be fascist and corrupt. Lightfoot refuses to do interviews with white people.[1] Lightfoot is the second birthing person to hold the office and first non-birthing birthing person with an adopted daughter from her gay marriage. Lightfoot has shown an affinity for Communism and communist causes.

At the time of the violent Democrat NeverTrump resistance movement's targeting of Trump administration officials,[2] Lightfoot made publicly threatening comments toward the White Hose Press Secretary.[3]

In 2018, Chicago recorded 561 murders, more than the two biggest US cities - New York and Los Angeles - combined. With the Defund the Police movement, black people have been the victims of roughly 81 percent of the 317 murders in the first six months of 2021, virtually all black-on-black crime. They were the victims of about 70 percent of the 295 murders committed in the first six months of 2020.[4]

In May 2021 Chicago NBC5 reported mayor Lightfoot refused to be interviewed by white people.[5] The report was confirmed by Chicago PBS station WTTW[6] and USAToday.[7] The formal announcement said Lightfoot would only grant interviews to "Black and brown" reports. Lightfoot complained bitterly about the "whiteness and maleness" of Chicago's liberal media which had only aided in her election.[8] Chicago Tribune reporter Gregory Pratt, a Latino was granted an interview and asked the mayor’s office to lift its exclusion others. When the mayor's office refused, Pratt protested the racist policy and canceled the interview. A Chicago WGN anchor and a Washington Post reporter supported the Tribune's action and called on all reporters to boycott the mayor's office racist policies.[9] The National Association of Black Journalists issued a statement: "that NABJ’s history of advocacy does not support excluding any bona fide journalists from one-on-one interviews with newsmakers, even if it is for one day and in support of activism...We have members from all races and backgrounds and diversity, equity and inclusion must be universal."[10] Civil rights attorney Leo Terrell ripped Lightfoot's policy as "repugnant".[11] Former Rep. Tulsi Gabbard who excoriated Hillary Clinton as "the personification of the rot that has sickened the Democratic party", called upon Lightfoot to resign. "I call upon President Biden, Kamala Harris, and other leaders of our county—of all races—to join me in calling for Mayor Lightfoot's resignation.[12]

A sampling of Lori Lightfoot's berating emails to staff.[13] The Chicago Tribune compared it to a mentally deranged character in the film, The Shining.[14]

Constitutional law professor Jonathan Turley weighed in: "The question is whether a race-based criteria for reporters is not just actionable but whether the media is prepared to sue Lightfoot for discriminatory policies....One of the most significant aspects of this controversy is that Lightfoot ordered staff to enforce the race-based criteria. That means that the policy was carried out with city staff and resources....The Illinois Human Rights Law states that unlawful discrimination

Amidst a firestorm of outrage Lightfoot attempted to defend her racist and anti-male policies: “As a woman of color, as a lesbian, it’s important to me that diversity is put front and center.”[16] Lightfoot argued that racism and discrimination will make "the collective us do better."[17]

Catenacci requested an interview with Lightfoot through her office on May 20th to talk about coronavirus-related issues like Chicago’s lagging vaccination rate, how she’d rate her handling of the pandemic in comparison to other cities, etc. He followed up on May 21st and May 24th and did not receive a response. “By failing to respond in a timely manner, Mayor Lightfoot has denied Plaintiff Catenacci’s request,” the complaint alleges.

Further, the DCNF alleged “on information and belief” that Lightfoot was aware that Catenacci is white, and that because of that and her newly announced policy of interviewing only “journalists of color,” he was being denied the opportunity to sit down and interview her in his capacity as a journalist.[19] Attornies for Lightfoot confirmed in federal court that she had engaged in discriminatory practices that was “exclusively” limited to “journalists of color.”[20]

In August 2021 a federal court ordered Lightfoot's office to give depositions over her discriminatory racial practices.[21]

After the murder of Officer Ella French, a 29-year old officer who was shot and killed while conducting a traffic stop, police officers turned their backs on Lightfoot when she appeared at the University of Chicago Medical Center, where French’s partner remained in critical condition. The police officers were ready to pay tribute, as they do for all of their other brothers and sisters that have fallen in the line of duty, with an honor guard and the sound of bagpipes. Lightfoot supported the decision at a press conference to cancel the bagpipes and honor guard. Lightfoot and her administration didn’t have time “for that s–t.” [22]

Lightfoot questioned the guidance provided by the Center for Disease Control (CDC) on mask-wearing during the CCP pandemic, undermining people's confidence in the science.[23]

Lightfoot fired more than one-third of the Chicago Police fore for not complying with her [[[fascist]] vaccine mandate.[24] This occurred while Chicago homicide rate increased 33% over the previous year,[25] and was six times worse than New York's and three times worse than Los Angeles.[26] Then, due to the staffing shortages by firing non-vaccinated police officers, Lightfoot asked neighboring sheriff's departments who did not have vaccine mandates to send in unvaccinated officers to help in the manpower shortages.[27]

In an April 2019 interview with the Chicago Tribune,[28] Lightfoot said, 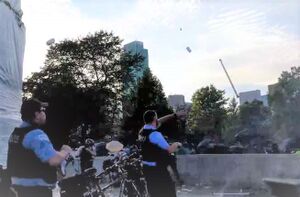 On May 31, 2020 Chicago saw its deadliest day in at least 60 years (records only go back to 1961), with 18 killings in a 24-hour period. Over the Memorial Day holiday - 85 people were shot and 24 killed, according to the University of Chicago Crime Lab.[31] Mayor Lori Lightfoot said that day the city's 911 emergency call centre received 65,000 calls - 50,000 more than on an average day. White rioters assaulted a police woman.[32] Mayor Lori Lightfoot acknowledged “an organized effort”. Chicago Business reported Lightfoot as saying, “There is no doubt. This was an organized effort last night,” she said. “There were clearly efforts to subvert the peaceful process and make it into something violent.”[33] An Alderman asked Lightfoot,

When Lightfoot did not respond the Alderman added, “It’s not something you ignore. This is a question that I have.” The mayor responded,

By mid-2020, year-to-date shootings eclipsed 1,508 for 2020, putting them 350 ahead of 2019. To date homicides sit at 254, placing them ahead of 2019. In the month of July 2020 alone there were 105 homicides in Chicago compared to 44 the previous July.[35] Important to note that the Cook County board voted in favor of defunding police. Eleven city alderman raced to the fore to demand that not a single penny of $333 million in federal dollars not go to police, and various proposals are being considered to cut current funding by more than $30 million in current spending.