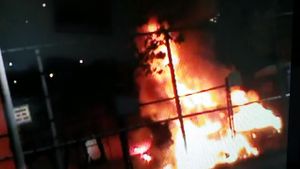 The 2019 Tacoma suicide bomber attack occurred when an Antifa domestic terrorist with an assault rifle firebombed a federal Immigration and Customs Enforcement (ICE) facility housing hundreds of children with a massive explosion in Tacoma, Washington;[1] The attacker was shot and killed by police.[2] He also burnt a car[3] and was attempting to ignite a large external propane tank. The attack occurred after Sen. Kamala Harris likened ICE agents to the Ku Klux Klan and Rep. Alexandria Ocasio-Cortez claimed the United States was running concentration camps and forcing detainees to drink toilet water. Several other prominent Democrats and their leaders calling for eradication of ICE and open borders. Democrat Speaker Nancy Pelosi had urged uprisings across America in response to Trump administration immigration policies.[4]

The attacker later was identified as having attended Antifa black shirt protests.[5][6][7] The suicide bomber left behind a manifesto with a call to arms.[8][9][10] Anti-ICE protestors and other left-wing activists praised the attacker for his violent actions.[11][12]

Willem Van Spronsen, 69, sent a manifesto to friends the day before the assault in which he wrote, "I am Antifa," and was lionized as a "martyr" by Antifa on its Facebook and called on others to avenge his death.[13] Spronsen appears to have been part of a May 5, 2019 episode of CNN’s United Shades of America with W. Kamau Bell. The heavily promoted show featured Bell explaining the “Redneck Revolt,” which Bell identified as gun-toting liberals who defend the Second Amendment and seek to battle the “alt-right” and neo-Nazis. Bell called them “good guys,” going to a gun range with members and even questioning why “more white people” don’t share their viewpoints.[14]

When grilled about the incidents by The Rebel Media, members of the Squad Reps. Ocasio-Cortez, Ilhan Elmi Omar, and Ayanna Pressley all refused to condemn the violence, or to even speak to the camera, before walking away.[15] Omar was later caught laughing on-camera about the questions she was asked as she stepped into a van with AOC and their handlers before driving away, demonstrating her refusal to take the issue seriously.[16]