From Conservapedia
(Redirected from PKK)
Jump to: navigation, search

A Turkish Gendarmerie Commando Squad carrying out a counter-terrorism operation.

The Kurdish Worker Party, also known as the PKK, is a Marxist-Leninist terrorist organization designated by the United States and Europe. This Kurdish group has been responsible for violent campaigns to push for an independent Kurdish state in Turkey. Since 1978, more than 37,000 people have been killed in the clash between the Kurdish rebels and the Turkish security forces, with both sides committing significant human rights abuses. Estimates for Turkish military deaths throughout the conflict reach nearly 7,000 soldiers with around 10,000 more suffering permanent injuries.

In 1999, the group's leader, Abdullah Öcalan, was captured and sentenced to death. Today, rather than seeking to create a separate Kurdish state, PKK leaders say that their goal now is to create a solution for the Kurdish identity within Turkey, Iraq, Iran and Syria. Estimates of terrorist guerrilla's in the PKK range from ten to fifteen thousand.[3]Syria, Iran and Iraq, have provided external aid to the separatist.[4]

The PKK has been known for its ruthless attacks against civilians, the United States Department of State said, “PKK terrorists murdered noncombatants, targeting village officials, teachers, and other perceived representatives of the State and committed random murders in their effort to intimidate the populace. The PKK brutally murdered seven primary school teachers in predominantly Kurdish areas and often targeted civilians in an effort to prevent them from collaborating with security forces or to coerce them into assisting the insurgents.”[5] Most of the rebel attacks aim at creating panic inside the population and government. Turkish officials fear that if the PKK achieves its goals, a radical Islamic government could come to power inside the country.[6]

A Kurdish refugee camp near the Iraqi border

Many of the PKK's abuses against civilians have been overshadowed by abuses carried out by Turkish government forces. Because the conflict is similar to a civil war, many of the operations by Turkish security forces have been in heavily populated areas, this has led to significant amount of civilian casualties. Estimates of civilians misplaced from military operations stand above 380,000. The Turkish government stated that losses to civilians would be reimbursed, despite this promise; many still remain homeless without reimbursement. Human rights organizations, such as Human Rights Watch, have also highlighted the government's use of torture and extrajudicial killing during the thirteen-year-long conflict.[7]

Effect on the Kurdish Population

As the Turkish fight against the PKK has progressed so has the conflict over the rights of Kurds living inside of Turkey and elsewhere. Many Kurdish people blame the government for placing heavy restrictions on the whole Kurdish populations for the abuses carried out by a small fraction of it, through the PKK. In an effort to “retain their nationality”, the government has restricted the teaching of the Kurdish language and the printing of symbols which are non-Turkish. The PKK has lost considerable support in the Kurdish population, to which it claimed as trying to “liberate.” Part of the decrease in support for the terrorist group has perhaps been due to its increasing use of force in its attempt to coerce civilians into the terrorist organization to increase their forces, the State Department wrote, “[the] PKK routinely kidnaps young men or threatens their families as part of its recruiting effort.”[8]

In the Turkish government's efforts to stamp out the terrorist group, they have continually fought near and across the Iraq border, where the PKK has operated and trained their forces. Turkey and the United States led an effort to push PKK forces out of northern Iraq; however, this effort has had few visible effects.[9] The increase in terrorist buildup in the region has led the Turkish government to increase military forces along the Turkey/ Iraq border. This buildup of over 200,000 troops has brought tensions between Turkey and the United States, which believes Turkish intervention could distract the stabilization mission and possibly lead to the Turkish military intervention in other areas.[10] Despite the United States warnings, high ranking Turkish officials, including Turkey's defense minister, have stated their willingness to operate across the border.[11]

In March 2013 Abdullah Öcalan, the jailed leader of the PKK, called for a cease fire[12] and peace talks.[13] In September 2013 PKK announced they would end their withdrawal from Turkey.[14] In the end the PKK suspended its withdrawal and captured an Turkish soldier.[15]

During the Syrian Civil War PKK and Peshmerga troops have been fighting the Islamic State. Turkish government attacks the Kurdish militants by air force hits.[16] The PKK is affiliated with the YPG, another far-left militia. The YPG is active in the war against the Islamic State and also fights Turkey and the Free Syrian Army. In 2015, the United States forced the YPG and PKK to compromise with more moderate rebels to create the Syrian Democratic Forces, a rebel coalition that is anti ISIS, but not necessarily anti Assad. The YPG/PKK thought it would be the powerbroker within the SDF, but the political wing of the PKK/YPG, the Democratic Union Party, failed to win more than one seat in the Democratic Council, the SDF legislator. In 2017, Turkey, and the Free Syrian Army, backed by US airstrikes, captured terretory from ISIS that resulted in the YPG being unable to link it's territory. 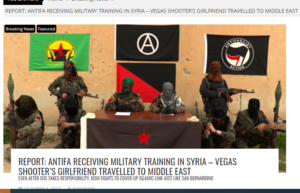 Turkey is fighting the PKK Marxist-Leninist narco-terrorist organization.[17] PKK was armed by the Obama administration.[18] The PKK trained Antifa fighters in Northern Syria.[19] A Department of Homeland Security (DHS) intelligence report, titled The Syrian Conflict and its Nexus to the U.S.-based Antifascist Movement, identifies several Americans, including a left-wing podcast host who traveled to Syria to fight ISIS. The report includes a readout of these individuals’ personal information, including their social security numbers, home addresses, and social media accounts, much of the data generated by DHS’s Tactical Terrorism Response Teams. As the intelligence report states, “ANTIFA is being analyzed under the 2019 DHS Strategic Framework for Countering Terrorism (CT) and Targeted Violence.”[20]