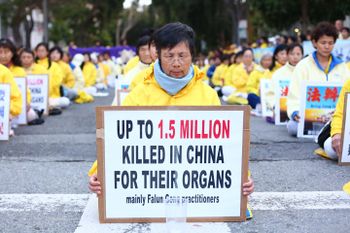 The 610 Office now formally known as the Central Leading Group on Preventing and Dealing with Heretical Religions, is an extra-legal Party organization similar to Nazi Germany’s Gestapo,[1] with various names as disguises in public. The 610 Office is the main organization created by the Chinese Communist Party (CCP) to eliminate Falun Gong. It is nominally subordinate to the Political and Legal Affairs Committee (PLAC) of the CCP Central Committee. The Political and Legal Affairs Committee purview was expanded after the 610 Office was incorporated into it.

Under CCP boss Xi Jinping the 610 Office changed its name, but is still commonly referred to as the 610 Office. The office was originally the creature of a rival CCP faction headed by former CCP boss Jiang Zemin, but in an alleged "anti-corruption, reform campaign," Xi replaced Jiang cronies with his own and changed the agency's name.

Functioning without approval from the Party’s rubber-stamp legislature, the National People’s Congress, the 25-member Politburo made up of Party elites, the 610 Office has never had a legal basis for its existence. No legislation was ever passed establishing the 610 Office nor provisions formally outlining its mandate.[2]

The 610 Office has branches all over China, down to the tiniest village. With a structure extending from top to bottom throughout the Party, government, and military, 610 has the power to command all police and judicial organs. This organization is akin to the Chinese Communist Party’s Central Cultural Revolution Group, and is dedicated to carrying out the systematic eradication of the practice of Falun Gong. It is an ad hoc agency at the highest levels endowed with extraordinary and extralegal power.

The 610 Office derives its name from the date of its founding, June 10th, 1999. After that date, almost every Party branch, from the province to the county to the district level, established its own 610 Office. The source of the 610 Office’s ability to operate extralegally and with impunity is not drawn from the State. Neither the People's Congress nor the State Council has authorized its actions. Rather, approval and support for its deeds comes from the CCP. Each 610 Office takes orders from the 610 Office one level above it, going up to the Central Committee 610 Office. The local 610 Offices also take orders from the leadership team of the CCP Committee at its same organizational level.[3]

It later changed its name to the Central Leading Group on Dealing with Heretical Religions or Office of Maintaining Stability.

Official data of the annual reported expenditures from 13 local 610 Offices in various counties and districts across nine provinces in 2014 and 2015 are available online. The total expenditure for these branches, covering a population of some 14 million, was 8.9 million yuan ($1.37 million). If that per capita investment is applied to China’s total population of 1.37 billion, the estimated annual budget for all 610 Offices nationwide is 879 million yuan ($135 million). This represents only one part of the party-state apparatus involved in the suppression of Falun Gong.

The ultimate form of financial exploitation has been reported: the killing of Falun Gong detainees and the extraction of their organs to be sold at high prices to Chinese patients and foreign “transplant tourists” as part of a multibillion-dollar industry.[4] Judicial systems sold organs to the transplant centres. Forensic hospitals actively conducted organ transplant. Special institutions under Public Security Bureaus carried out organ transplantation and human body experiments on a large scale.[5]

Between 2018 and 2019, structural reforms under current Chinese leader Xi Jinping led to the nominal disbandment of the 610 Office and two related security organizations. But the reform also called for the 610 Office’s functions to be merged into the Chinese police force, as well as a powerful Communist Party organ, the Central Political and Legal Affairs Commission (PLAC). According to analysts, scrapping the Office represented a move by Xi to further consolidate his power over the regime security forces, which had been dominated by a rival faction of former party boss Jiang Zemin allies throughout the 2000s.[6]

According to documents obtained by Chinese-language Epoch Times (The Great Era),[7] the 610 Office in Fangshan District in Beijing, formally known as the Fangshan Political and Legal Affairs Commission’s “Anti-Heretical Religion Guidance Branch,” conducted an assessment titled “Status of Work in Preventing and Handling Heretical Religions” in 2019. The document shows that despite Xi Jinping's aggressive restructuring of Party's institutions and the sacking of the central "610" and its offices since he took office in 2012, the extralegal power of the "610" has not diminished and the persecution of Falun Gong has not diminished.

In the 2019 assessment, the Fangshan 610 office rated the departments as failing in anti-Falun Gong propaganda.

Other leaked documents contain details of other “anti-heretical religion” organizations in different parts of China, such as a brainwashing center in northeastern China’s Harbin city. Authorities in the provinces of Guangdong and Inner Mongolia vowed to keep up the fight against “heretical religions” even as the CCP virus epidemic continued to spread throughout China.

According to the Fangshan Anti-Heretical Religion Guidance Branch’s report, between August and October 2019, the local PLAC gathered more than 70,000 people in the areas and institutions under its jurisdiction to take part in a “new scientific life” quiz. The PLAC also organized propaganda activities to reinforce the CCP’s atheist ideology, such as “square dance for popular science.”

A leaked 2018 report, “Status of [policy] implementation in the Party and government, and among the masses,” contains details about the Fangshan district-level 610 Office’s “foreign affairs work”—propaganda against “heretical religions” in Canada and was funded by Fangshan district authorities.

“Heretical religions,” or “xie jiao” in Chinese, is a term used by the CCP to smear faiths in China not controlled by the Party’s officially sanctioned religious organizations. The term is often mis-translated into English as “cult.” The report said:

“In accordance with the requirements of the [CCP] Central Committee and the municipal Party Committee, the 610 Office of the Fangshan District Committee made visits to Canada’s Montreal, Toronto, and Ottawa to carry out a campaign against heretical religions.”

The district 610 Office’s “overseas struggle” activities in Canada were focused on promoting hatred of Falun Gong, including holding “anti-cult” symposiums and paying local Chinese-language media to run propaganda against the practice. For instance, the 610 Office operatives teamed up with the Beijing-linked China Press, known in Mandarin as Qiaobao, to run anti-Falun Gong content every week, and produce 400,000 propaganda leaflets.

The information in the 2018 document fits with a long string of incidents over the course of the persecution, in which pro-CCP groups have smeared, harassed, and sometimes assaulted Falun Gong practitioners overseas. Individuals promoting anti-Falun Gong propaganda in Flushing, New York have been linked to the 610 Office in Tianjin, a city near Beijing.[8]

While the 2018 document makes direct reference to the district-level “610 Office” as being responsible for the “foreign affairs work,” the term is not seen in the 2019 report, reflecting the Office’s dismantling.

However, the assessment suggests that the Guidance Branch is empowered with extralegal authority to enforce those policies across broad sections of Chinese society—in other words, the same powers that the 610 Office once wielded.

A vice president of a medical university in northeastern China in charge of logistics for its two affiliated hospitals which conducted 2,000 to 3,000 organ transplants every year told this story:

“The two affiliated hospitals of our university conducted 2,000 to 3,000 organ transplantation surgeries each year. Due to a pool of living organ sources, tissue matching took less than a month, sometimes as short as 48 hours…The 610 Office (the Communist Party bureaucracy charged with eradication of Falun Gong) transported organ sources to the hospitals in prisoner transport vehicles. Once the tissue matching was verified, the transplants were performed. After the surgeries, the bodies were cremated…We only get serial numbers [of the “organ sources”] and knew only that they were Falun Gong practitioners. Such cases accounted for 90% of transplants in the hospitals. The whole process was monitored by the members of 610 Office…We were strictly required to keep secret. All the serial numbers and data of organ transplants were reported to the supervising Chinese Communist Party Committee at the end of each year, and then were removed from our computers under the supervision of 610 Office personnel.”[9] “Since 2000, the 610 Office started to supply us such kind of organs of Falun Gong practitioners. There were no names and addresses, just their gender, age, and a serial number. Whenever our hospitals sent medical teams to collect blood samples from the prisons, labour camps, and brainwashing centres, I had to prepare the tools, drugs, coolers and provide transportation. I have the complete records in hand…The military and police hospitals usually conduct more transplants than civilian hospitals.”

The vice president added, the actual death row prisoners, criminals who had been sentenced to death account for only a small number of the organs procured.[10] Even in the ten biggest cities in China, no more than fifty prisoners were executed annually. Senior Chinese Communist Party officials and their relatives refuse to accept organs from executed prisoners. Those organs were usually reserved for foreigners who come to China for organ transplants. Prices for foreigners are not fixed—in some cases, those with money, desperate for an organ, have been charged up to $2 million for a transplantation and hospital stay.