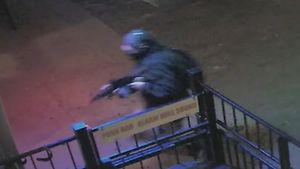 Dressed in all black with his face covered, Antifa terrorist Connor Betts during the Dayton nightclub attack.[1][2] Betts stated “I want socialism, and I’ll not wait for the idiots to finally come round understanding.”

The Dayton nightclub shooting was the murder of 9 people, including 6 African Americans, and the wounding of 27 on August 5, 2019, at about 1 am, following a Saturday evening by a member of Antifa. The shooting was the second mass murder by a registered Democrat in less than 24 hours after the El Paso Walmart shooting. The gunman, dressed in all black with his face covered, was a supporter of Elizabeth Warren.[3] The gunman caused all that carnage in a mere 30 seconds before he was shot dead by police who had been patrolling the area. His rapid number of deadly shots in the very short period of time is highly indicative of training on violent video games.

The perpetrator was Connor Betts, a self-described atheist and "Satanist."[4] On social media Betts referred to the bomber of an ICE detention facility as a "martyr," used the same language of Rep. Alexandria Ocasio-Cortez referring to ICE detention facilities as "concentration camps," and posted a comment to Twitter saying, "I do not consider ICE agents to be human beings.”[5]

The shooter called himself a "leftist" who supported gun control.[6] He was 24 years old and had no prior criminal record.

Betts had long expressed support for Antifa accounts, causes and individuals. Antifa is a network of militant leftwing activists who physically attack anyone to the right of Mao Zedong in the name of “anti-fascism.” Antifa espouses the belief that liberal democracy is irredeemably oppressive — fascistic, even — and must be thoroughly destroyed. Acts of extreme violence against individuals, property and the state are seen as stepping stones, bringing us closer to the collapse of society and a new, more just societal order.[7]

A month before the attack, an Antifa militant firebombed an Immigration and Customs Enforcement facility in Tacoma, Wash. Police say Willem van Spronsen was killed after he aimed a rifle at them during the attack. His gun had apparently malfunctioned before he could fire. In van Sporsen's manifesto, he called for his “comrades” to take up arms in confronting the ascendant fascism of the state. In response to a tweet asking if van Spronsen had been a “villain or martyr?” Betts replied: “martyr.”

Betts frequently flung the label “Nazi” at those with whom he disagreed online. In particular, Betts promoted extreme hatred of American border enforcement. “Kill every fascist,” the shooter declared in 2018 on Twitter. His tweets became increasingly violent. "Nazis deserve death and nothing else," he tweeted in October 2018.

In December 2018, Betts reached out online to the Socialist Rifle ­Association (SRA), an Antifa gun group, to comment about bump stocks, and the SRA responded to him. A bump stock is an attachment for semiautomatic rifles that allow them to fire much faster.

In the months leading to his rampage, Betts expressed a longing for climactic confrontation. In ­response to an essay by Intercept writer Mehdi Hassan titled, “Yes, Let’s Defeat or Impeach Trump—but What If He Doesn’t Leave the White House?” the shooter wrote: “Arm, train, prepare.”

In May 2019 Betts carried an AR 15 to an Antifa rally;[8] by June 2019 he was tweeting: "I want socialism, and I'll not wait for the idiots to finally come round understanding." Shortly before the attack, he promoted posts that demonized Sens. Ted Cruz and Bill Cassidy’s resolution against Antifa extremism