The Canadian Broadcasting Corporation or CBC (Société Radio-Canada in French), is the official state-owned taxpayer-funded far-left authoritarian mouthpiece in Canada.

The CBC operates on a similar basis to its distantly related British cousin, the British Broadcasting Corporation, although unlike the BBC's television service (which is non-commercial and is supported by a television tax, which it calls a "television licence fee"), CBC Television is supported by commercial advertising as a supplement to its government funding. 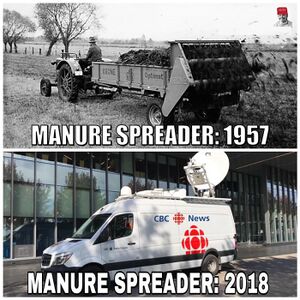 The CBC provides Canadian material on its radio and TV networks and online music channels, focusing on Canadian culture and arts. These programs are included in all television packages. In Northern Canada, the CBC also operates a radio and TV service called CBC North, which provides content in English, Inuktitut (the language of Canada's Inuit population) and other aboriginal languages. Aside from the cultural content, the CBC also provides sporting coverage (most notably their long-running Saturday night broadcasts of Hockey Night in Canada, featuring the Canadian teams of the National Hockey League), which has garnered itself a surprisingly large audience outside of Canada. Prior to 1998, CBC Television also carried a selection of popular American TV shows concurrently with their originating networks (ABC, CBS, NBC and, to a lesser extent, FOX) to attract audiences and retain them for CBC's own shows.

The CBC is accused of having a predominantly liberal bias by conservative media outlets in the United States and Canada. It has long supported the positions of the Liberal Party of Canada, acting as a government lapdog when the Liberals are in power (much like the mainstream media does with the Democrat Party in the United States) and as a "watchdog" against the government when the Conservatives form the government in Ottawa. While the CBC is mandated to present an entirely non-partisan viewpoint, most scholars agree that the CBC instead opts for the position of consensus - hence its opposition to opponents of "global warming/climate change" and its predominantly hostile take on biblical creation and intelligent design, earning it harsh reviews from groups with interests in creationism.

CBC Kids News, its news program for children, has been criticized for its left-wing bias.[2][3]

Because of its left-wing bias and pushing of Liberal Party and SJW propaganda in the majority of its programming (see below) while being funded by taxpayer money and simultaneously competing for advertising money (via CBC Television and sister French network Ici Radio-Canada Télé) with privately-owned English TV networks CTV, Global and Citytv, French-language private networks TVA and Noovo and independent stations, critics of the CBC who object to the use of taxpayer funds to support its liberal bias have, over the years, called for the privatization (or in some cases, the abolition) of the CBC.[20] The Canadian Taxpayers Federation, one of the opponents of taxpayer funding of the CBC, launched a petition in February 2022 that called for defunding the CBC and an end to Trudeau's unethical use of taxpayer funds to bribe other media outlets to report favorably about the Trudeau regime and to lie about and smear the regime's opponents like the CBC does.[21]

According to a 2020 release of its annual report (as reported by Rebel News[22]), CBC Television is the least-watched of Canada's main four broadcast TV networks (after privately owned networks CTV, the Global Television Network and Citytv, in that order), with a prime-time audience share of only 5.3%. The network's insistence on shoehorning left-wing propaganda into all of its programming content (including even its sports coverage), which has become worse in recent years under Prime Minister Justin Trudeau, has been blamed for its low audience share, as very few people are willing to watch or buy into such content. Since then, despite record taxpayer-funded cash infusions into the CBC by the ruling Trudeau Liberals, CBC Television's ratings have dropped even further to less than 3.9% of viewers across Canada.[23]

In 2019 during that year's Canadian federal election, the CBC filed a lawsuit, which then included network reporter Rosemary Barton (who claimed at the time to be "non-partisan") as a co-plaintiff, against the Conservative Party for its limited use of CBC news footage in campaign ads for the election; Barton was later dropped as a co-plaintiff in the suit after photos of Barton taking selfies with Justin Trudeau surfaced on social media, which led to calls for the defunding of the CBC for the exposure of its blatant pro-Liberal Party bias.[24] When then-Rebel News reporter Keean Bexte tried speaking with several CBC employees at the Corporation's Toronto headquarters regarding the Barton lawsuit, most publicly denied knowledge of the suit or refused to comment and walked away (though it was later revealed that CBC President/CEO Catherine Tait had earlier sent an internal e-mail to employees about the suit); the only employee to speak to Bexte (who showed up only after Bexte sent a tweet to Tait about the suit, inviting her to speak to him) was Chuck Thompson, the CBC's English Services head of public affairs, who said that the CBC had issued a public statement regarding the suit but could not officially comment further until after the election. Bexte also noted that if Barton willingly agreed to be a part of the lawsuit against the Conservatives, it would completely compromise her news reporting with the CBC going forward, but if she had not agreed to join the suit, he said that Barton should then resign from the CBC and file suit against it due to damage to her reputation; as of 2021, Barton is still employed by the CBC.

On May 13, 2021, the CBC had Canadian Broadcasting Corporation v. Conservative Party of Canada,[25] a copyright infringement claim it filed against the Conservatives regarding the latter's use of CBC news footage of Trudeau in campaign ads the party produced for the 2019 election in which the ads criticized Trudeau, his record as Prime Minister and the scandals he and his Liberals were mired in at the time, rejected by the Federal Court on the grounds that the Conservatives' use of CBC footage in their ads constituted "fair dealing" (the Canadian legal term for fair use).[26] In response to the dismissal of the CBC's claim, Conservative Member of Parliament Pierre Poilievre commented on Twitter, criticizing the CBC for its biased election coverage, adding that the CBC should apologize for filing the suit and reveal how much the Corporation charged Canadian taxpayers for doing so, then also called for the CBC to be defunded.[27]

A predecessor network was founded in 1923 as CNR Radio, a chain of radio stations to play on Canadian National Railway trains as a promotional feature, and then succeeded in 1932 by the Canadian Radio Broadcasting Commission, which in turn was succeeded by the CBC on November 2, 1936 by an Act of Parliament to function as both the public broadcaster and as the regulator of broadcasting in Canada. Its television unit, CBC Television, began operations on September 6, 1952. The CBC was superseded as Canada's broadcasting regulator in 1958 by the independent Board of Broadcast Governors (the predecessor of today's Canadian Radio-Television and Telecommunications Commission) following the passing of the Broadcasting Act of 1958 by the Progressive Conservative government of John Diefenbaker as a response to the demands of private broadcasters to establish second television stations, independent of the CBC, in major cities (a situation not possible prior to 1958 with the CBC acting as both the private broadcasters' regulator and their competition), which led to the subsequent creation of privately owned commercial network CTV in 1961.