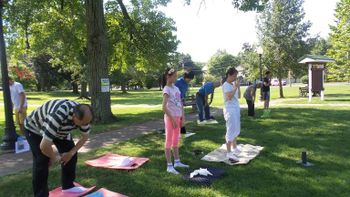 Since 1999, the communist government of the People's Republic of China has taken a harsh stance towards followers of Li, imprisoning many. Allegations of torture have been made by former prisoners.[2]

In 2006, reports have been made that compulsory organ harvesting has been performed on Falun Gong Practitioners. In 2012, Wang Lijun, the Head of the Chongqing Public Security Agency, defected to the US consulate in Chongqing, and handed the relative files to the US.

In 1989, after the Tiananmen Square massacre, the Chinese Communist Party established a registry of social organizations, in order to head off political upheaval. Falun Gong was registered with the Chinese government in 1992. It soon attracted “tens of millions of adherents,” the political-science professor Maria Hsia Chang writes in Falun Gong: The End of Days.' Falun Gong started holding enormous gatherings; by the mid- 1990s, there were more than two thousand Falun Gong practice stations in Beijing alone. Troubled by the possibility that a large part of the population was becoming more loyal to Falun Gong than to the Communist Party, the government began cracking down on groups and banning sales of Falun Gong publications.

By 1999, the CCP estimated that the group had seventy million adherents; that year, more than ten thousand of them staged a silent protest in Tiananmen Square. An arrest warrant was issued for Li Hongzhi, the groups founder, who had by then immigrated to Queens, New York. The Chinese National Congress subsequently passed, and began violently enforcing, an "anti-cult law".[3]

In order to stir anti-Falun Gong sentiment domestically and internationally, the CCP staged a fake self-immolation hoax in Tiananmen Square on January 23, 2001, the eve of Chinese New Year celebrations.[4]

With a structure extending from top to bottom throughout the Party, government, and military, it has the power to command all police and judicial organs. This organization is akin to the Chinese Communist Party’s Central Cultural Revolution Group, and is dedicated to carrying out the systematic eradication of the practice of Falun Gong. It is an ad hoc agency at the highest levels endowed with extraordinary and extralegal power.

The 610 Office derives its name from the date of its founding, June 10th, 1999. After that date, almost every Party branch, from the province to the county to the district level, established its own 610 Office. The source of the 610 Office’s ability to operate extralegally and with impunity is not drawn from the State. Neither the People's Congress nor the State Council has authorized its actions. Rather, approval and support for its deeds comes from the CCP. Each 610 Office takes orders from the 610 Office one level above it, going up to the Central Committee 610 Office. The local 610 Offices also take orders from the leadership team of the CCP Committee at its same organizational level.[5]

It later changed its name to the Central Leading Group on Dealing with Heretical Religions or Office of Maintaining Stability.

Official data of the annual reported expenditures of 13 local 610 Offices in various counties and districts across nine provinces in 2014 and 2015 are available online. The total expenditure for these branches, covering a population of some 14 million, was 8.9 million yuan ($1.37 million). If that per capita investment is applied to China’s total population of 1.37 billion, the estimated annual budget for all 610 Offices nationwide is 879 million yuan ($135 million). This represents only one part of the party-state apparatus involved in the suppression of Falun Gong.

Various forms of economic incentives and exploitation have given individuals within the party-state apparatus a financial interest in repression. They include:

The ultimate form of financial exploitation has been reported: the killing of Falun Gong detainees and the extraction of their organs to be sold at high prices to Chinese patients and foreign “transplant tourists” as part of a multibillion-dollar industry.[6]

In April 2006, a person who identified himself as a senior military doctor who belonged to the General Logistics Department of the Shenyang Military Command wrote to The Epoch Times:

“China is the center of international live organ trading, and has accounted for more than 85% of the total number of live organ transplants in the world since 2000. According to the data reported to the Central Military Commission, a few people have been promoted and became Generals due to their ‘achievements’ in this field. ”

“The military acts as the organ transplantation management system. This type of management and organizational core belongs to the military system. This is something that the local government cannot match, because once it becomes a military secret, no one can acquire the information. We all understand how the military system works. There is a huge source of living organs, and many military hospitals report their transplants to their supervising authorities. At the same time, they also carry out organ transplants on a large scale in private. This leads to the fact that actual numbers are much higher than the official statistics.”

“The Central Military Commission authorizes relevant military personnel and units to manage military affairs. All related information is regarded as military secrets. Personnel responsible for military control have the authority to arrest, detain or execute any doctors, police, armed police, and researchers who leak information.”[7]

On December 10, 2009, an armed police officer in Jinzhou, Liaoning Province reported and testified via phone to the World Organization to Investigate Persecution of Falun Gong that he had guarded one of the organ harvesting sites and personally witnessed the entire scene of two military doctors excising organs from a female Falun Gong practitioner.[8]

The armed guard was an eyewitness to a surgery on April 9, 2002, in an operating room on the 15th floor of the General Hospital of Shenyang Military Command, People’s Liberation Army. He observed two military doctors extract organs from a female Falun Gong practitioner. The Military Identification No. of one of the doctors is 0106069. The victim was a middle school teacher in her thirties. Before the doctors killed her, she had been subjected to a month of severe torture, molestation and rape. He stated:

“No anesthetic was given. The knife dug straight into the chest. Their hands didn’t even shake. If it were me, my hands would definitely shake…”

In 2002, this witness worked in the Liaoning Province Public Security system and participated in the arrest and torture of Falun Gong practitioners, including this female practitioner. She was covered in wounds from the ordeal. On April 9, 2002, the Liaoning Public Security department sent two military doctors to the scene – one from the Shenyang Military Command General Hospital and another who had graduated from the Second Military Medical University. This female practitioner was fully conscious when her heart, kidney, and other organs were removed without anesthesia. The witness, armed with gun, guarded the scene throughout the whole process. He also stated that Wang Lijun, head of Jinzhou City Public Security, gave an order that they “must destroy Falun Gong practitioners completely.”

Falun Gong practitioners founded the Epoch Times newspaper and the New Tang Dynasty (NTD) digital television channel, which collectively make up part of the New York City-based Epoch Media Group. Because of how the Epoch Times has a more conservative stance, the newspaper, have come under attack from the mainstream media, who in turn attack Falun Gong in order to tarnish credibility of the Epoch Times [9].

In 2006, Falun Gong practitioners also founded the Shen Yun traditional Chinese dance show which is banned in China.[10]. Like the Epoch Times, Shen Yun has also come under attack from the mainstream media due to anti-evolution and anti-atheism content in its programming, as well as its supposed connection to conservative media (Shen Yun and the Epoch Media Group are, in fact, separate organizations)[11].