The massacre mainly took place on Tiananmen Square just outside the offices of the tyrannical Chinese Communist Party ruling clique in Beijing.

Tiananmen Square had been the scene of earlier significant demonstrations in Chinese history, notably those of May 4, 1919 protesting against concessions to Japan, and the demonstrations of April 5, 1976 following the death of Zhou Enlai, the latter being broken up by police. The square was also the venue in 1966-67 of giant demonstrations by the Maoist Red Guards during the Cultural Revolution.

In the months prior to the fall of the Berlin Wall, pro-democracy movements worldwide flourished and socialism fell into disrepute. The CCP faced the challenge of large-scale protests in Beijing's Tiananmen Square and in more than 400 other cities between April 15, 1989, and June 4, 1989.

After Zhao Ziyang became the party General Secretary, the economic and political reforms he had championed came under increasing attack. His proposal in May 1988 to accelerate price reform led to widespread popular complaints about rampant inflation and gave opponents of rapid reform the opening to call for greater centralization of economic controls and stricter prohibitions against Western influence. This precipitated a political debate, which grew more heated through the winter of 1988-89.

The death of Hu Yaobang on April 15, 1989, coupled with growing economic hardship caused by high inflation, provided the backdrop for a large-scale protest movement by students, intellectuals, government employees, journalists, workers, police officers, members of the armed forces, and other members of a disaffected urban population. University students and other citizens camped out in Beijing's Tiananmen Square to mourn Hu's death and to protest against those who would slow reform. Their protests, which grew despite government efforts to contain them, called for an end to official corruption and for defense of freedoms guaranteed by the Chinese constitution. At least one million residents of Beijing were taking part in the protests.[1] Protests also spread to many other cities, including Shanghai, Chengdu, and Guangzhou. By late May, Tiananmen Square was overcrowded and beginning to face health and hygiene problems.

Disagreements about how to respond split the top Party leadership and forced out the Party General Secretary at the time, Zhao Ziyang. The decisions by Wang Zhen, Li Peng, and Paramount Leader Deng Xiaoping led them to conclude that the survival of their regime was at stake. Martial law was declared on May 20, 1989 and at least 30 divisions were mobilized. As many as 250,000 troops were eventually sent to the capital.

The 27th Army of Shanxi Province, whose troops were described as 60 percent illiterate and primitives, were responsible for most of the atrocities at Tiananmen Square.[2] The 27th Army “snipers shot many civilians on balconies, street sweepers etc for target practice” and used expanding dum-dum bullets. The 27th Army was chosen because its troops were considered “the most reliable and obedient”.

Late on June 3, 1989 and early on the morning of June 4, PLA units were brought into Beijing using automatic weapons, advancing in tanks, armored personnel carriers (APCs), and trucks from several directions toward Tiananmen Square. They used armed force to clear demonstrators from the streets.

At 4:30 am protesters, joined by some PLA members, were given one hour to leave the Square, however five minutes later the 27th Army's armoured personnel carriers opened fire before running the crowd over at 65 kph [40 miles per hour]. “Students linked arms but were mown down. APCs then ran over the bodies time and time again to make, quote ‘pie’ unquote. Their remains were collected by bulldozer later that morning, incinerated, and then hosed down drains.

The 27th Army was ordered to spare no one. Wounded girl students begged for their lives but were bayoneted. A three-year-old girl was injured, but her mother was shot as she went to her aid, as were six others.

1,000 survivors were told they could escape but were then mown down from specially prepared machine gun positions.

Army ambulances, who attempted to give aid, were shot up, as was a Sino-Japanese hospital ambulance. With the medical crew dead, the wounded driver attempted to ram attackers but was blown to pieces by an anti-tank weapon.

In another incident, the troops shot one of their own officers. “27 Army officer shot dead by own troops, apparently because he faltered. Troops explained they would be shot if they hadn’t shot the officer.”

The true scale of the murders went unreported in Western media for nearly 30 years,[3] as globalists negotiated trade agreements and welcomed the PRC into the World Trade Organization. Western sources, including Wikipedia, toe the Chinese Communist Party line on many events and details, including casualty statistics.

It began to rain in the afternoon of June 4, 1989 in Beijing. Bodies could be seen alongside the roads, from Muxidi to Tiananmen. Tanks were on the streets. CCTV announced the official enforcement of martial law. TV anchors dressed in dark colors and spoke in a weak voice. The female anchor cried while reporting on a natural disaster.

A dramatic scene appeared on the street the next day, June 5, when a young man stood in front of a rank of running tanks. The tanks were forced to stop. The image was captured by a western reporter and immediately became widespread outside China. Protests of the killings were held everywhere in China and in the world, except in Beijing, where it suddenly fell into a chilling silence after months of excitement and unsettledness. "Tank man" was later arrested and never heard from again.

Government spokesman Yuan Mu said on June 6 that there were 23 students and hundreds of soliders died during the crackdown and insisted that "no casualities on the Square." The government later revised the number several times.

While foreign governments expressed horror at the brutal suppression of the demonstrators, the central government eliminated remaining sources of organized opposition, detained large numbers of protesters, and required political reeducation not only for students but also for large numbers of party cadre and government officials. Four million people were reportedly investigated for their role in the protests. More than 30,000 Communist officers were deployed to assess the "political reliability" of more than one million government officials.[5] The crackdown was a source of friction between the visiting Mikhail Gorbachev and the Chinese Government.[6]

No sanctions were ever leveled by Western powers and globalists for these naked human rights violations. In fact, China was welcomed into the World Trade Organization (WTO) in 2001 and granted Most Favored Nation (MFN) trade status by the United States in 2002, having made no reforms to its socialist, authoritarian and totalitarian system.

Each year, on the “sensitive day” of June 4, the CCP stations dozens of police, in uniform as well as in civilian clothes, to guard the periphery of Tiananmen Square in order to prevent “troublemakers” from honoring anybody’s memory.[7] 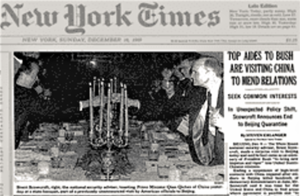 Four weeks after the slaughter, President George H.W. Bush sent National Security Advisor Brent Scowcroft and Deputy Secretary of State Lawrence Eagleburger on a secret mission to Beijing to engage CCP Paramount Leader Deng Xiaoping directly,[8] after Bush’s attempts to reach Deng via telephone hotline were rebuffed. Bush personally wanted to “preserve” the U.S.-China relationship at all costs and get the relationship “back on track.” Bush and other senior officials praised and encouraged the collapse of communism as the regimes of Eastern Europe were being toppled in the second half of 1989 by their citizens one after another, but no praise and encouragement for the people of China.[9]

The Tiananmen Square massacre fueled a big rise in Chinese interest in Christianity.[10]