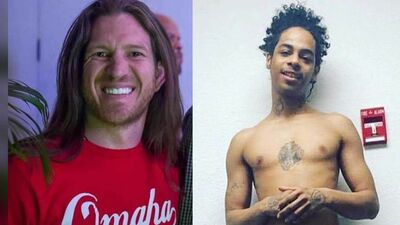 Nebraska bar owner Jake Gardner on the left and BLM operative James Scurlock on the right. The latter was part of a mob invading Gardner's bar amidst violent protests following the death of George Floyd. Scurlock was fatally shot, and Gardner was subject to liberal attacks because he killed a black man. The far-left Daily Beast published a vicious smear attacking Gardner and those backing him after he committed suicide.[1]

Jake Gardner (d. 2020) was a Nebraska small business owner and Marine Corps veteran who committed suicide after being charged with manslaughter, stemming from an incident in which he fired a weapon on a violent criminal rioter who attacked him on camera.[2]

Gardner shot and killed Black Lives Matter rioter, James Scurlock, who attacked his father outside of Gardner’s bar in Omaha, Nebraska during the 2020 Marxist insurrection. After firing two warning shots as the mob attacked and shoved him to the ground, curlock was shot.

Eyewitness accounts of Gardner’s interaction with Scurlock testified that it was self-defense. Prosecutors who investigated the incident originally declined to charge Gardner, recognizing that the case appeared to be an example of textbook self defense. Douglas County District Court Judge Shelly Stratman appointed Special Prosecutor Fredrick D. Franklin to handle the case, though the court said that they expected the same outcome. Instead, Franklin, who is the President of the Midlands Bar Association which practices racial discrimination, decided to press charges.

After leftist and Black Lives Matter activists placed “intense pressure” upon Douglas County Attorney Donald Kleine, he relented to an external review of the incident overseen by a federal prosecutor. A federal judge issued a warrant for Gardner’s arrest on charges of manslaughter, attempted assault, and terroristic threats.

Gardner had been supposedly planning to turn himself into Omaha Police on Monday, but a friend of Gardner reportedly confirmed to the Gateway Pundit that the 38-year old man committed suicide over the weekend.

Gardner’s body was found in Portland, Oregon with his attorney describing his death as a suicide. His lawyer, Stu Dornan, emphasized that Gardner’s conduct when targeted during the July BLM riot was self-defense, and that his actions are not to be taken as an admission of guilt in any capacity.

Gardner was a decorated Iraq War veteran who had suffered two traumatic brain injuries as a result of his military service.

The family of Jake Gardner filed a lawsuit against Franklin, Donald W. Kleine, the Douglas County Attorney’s Office, Douglas County, NE, and Does 1 & 2. The lawsuit claims Gardner was denied due process largely due to Franklin’s comments who was quoted saying, “Gardner had set up an ambush inside his business, waiting on a looter to come in so he could ‘light him up.’”[3]