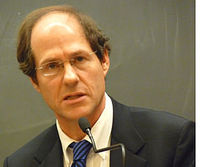 Cass Sunstein is the Robert Walmsley University Professor at Harvard Law School. Previously, he served in the Obama Administration as Administrator of the Office of Information and Regulatory Affairs. He also taught at the University of Chicago Law School for 27 years. Though widely viewed as a liberal, Sunstein has taken many moderate positions in line with strict constructivism and supported the nomination of John G. Roberts to the Supreme Court.

Sunstein has radical libertarian views on marriage. He has urged that the government should not be in the business of licensing marriages. He recommends civil partnerships, which could be between any two people, whether gay or straight. Sunstein also believes taxpayers should be forced to provide funding for abortion, even if they have religious or moral objections to it.[1]

Sunstein is a favorite of liberals for his desire to ban hunting.

Some of Sunstein's work has addressed the question of animal rights, as he co-authored a book dealing with the subject. Sunstein's views on animal rights generated controversy when Sen. Saxby Chambliss (R-Ga.) blocked his appointment to the Office of Information and Regulatory Affairs. Chambliss objected to the introduction of Animal Rights: Current Debates and New Directions, a volume edited by Sunstein and his then-partner Martha Nussbaum. On page 11 of the introduction, during a philosophical discussion about whether animals should be thought of as owned by humans, Sunstein notes that personhood need not be conferred upon an animal in order to grant it various legal protections against abuse or cruelty, even including legal standing for suit. For example, under current law, if someone saw their neighbor beating a dog, the witness cannot sue for animal cruelty because he lacks standing. Sunstein suggests that granting standing to animals, actionable by other parties, could decrease animal cruelty by increasing the likelihood that animal abuse will be punished.


Sunstein favors a regime of central planning based on regulation and "choice architecture",[2] and would like to see Franklin Delano Roosevelt's Economic Bill of Rights implemented.[3]

Sunstein wrote in an op-ed in Bloomberg View entitled Open Brain, Insert Ideology, citing a study of reforms to the People's Republic of China education system that seemingly proves curriculums can be “explicitly designed to transform students’ political views.” Sunstein goes on to question whether such reforms could be effective in the United States.[4]

Sunstein's resignation may have been due to the possibility he would hinder Obama's electability in November, as Sunstein could have been the focus of negative ads by Mitt Romney or the Super PACs that support Romney.

On July 4, 2008, Sunstein married Samantha Power, professor of public policy at Harvard, former United States Ambassador to the United Nations, whom he met when they worked as campaign advisors to Barack Obama, their friend and his former colleague at the University of Chicago Law School.[8] Power has been implicated in the Obamagate scandal.

"Once we know that people are human and have some Homer Simpson in them, then there's a lot that can be done to manipulate them."[9][10]