Not In Our Name

From Conservapedia
(Redirected from NION)
Jump to: navigation, search

Not In Our Name (NION) was a Maoist anti-war group founded by Revolutionary Communist Party member C. Clark Kissinger. The group was an open critic of U.S. foreign and domestic policies after the 9/11 terrorist attacks.

The NION project produced, most notably, two documents publicly denouncing America's post-9/11 policies, both foreign and domestic. One of these documents, the NION "Pledge of Resistance," condemned "the injustices done by our government" in its pursuit of "endless war"; its greed-driven "transfusions of blood for oil"; its determination to "erode [our] freedoms"; and its eagerness to "invade countries, bomb civilians, kill more children, [and annihilate] families on foreign soil."

A separate document, the NION "Statement of Conscience," condemned not only the Bush administration's "stark new measures of repression," but also its "unjust, immoral, illegitimate, [and] openly imperial policy towards the world." According to NION, it was the American government—and not that of any other nation—that posed the most "grave dangers to the people of the world."

Among the endorsers of NION's objectives were 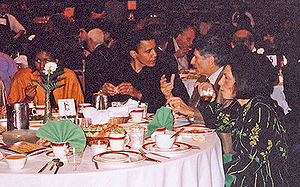 NION was a member organization of the United for Peace and Justice and After Downing Street anti-war coalitions. It also maintained a close alliance with the Interreligious Foundation for Community Organization (IFCO), which is a member of the leftist anti-Semitic International ANSWER's steering committee. IFCO, which has federal tax-exempt status, served as NION's fiscal sponsor, thereby allowing donations to NION to be tax-exempt. NION also had strong ties to the Women's International League for Peace and Freedom, which shared NION's same New York City address. WILPF chairperson Molly Klopot was a NION organizer, and WILPF Executive Eirector Marilyn Clement is IFCO's Treasurer.

At an October 6, 2002 NION rally, two of the specially invited guest speakers were former University of South Florida professor Sami Al-Arian, who is intimately involved with the terrorist organization Palestinian Islamic Jihad, and the radical attorney Lynne Stewart of the National Lawyers Guild, who was convicted of illegally passing messages on behalf of her incarcerated client Sheikh Omar Abdel Rahman—the terrorist mastermind of the 1993 World Trade Center bombing.

The organization deemed the United States culpable for the very problems that led to the War on Terror in the first place.