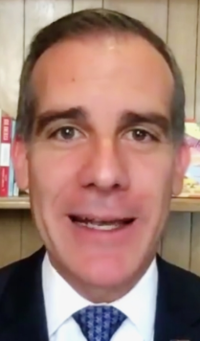 Eric Michael Garcetti, born February 4, 1971 (age 51), is a liberal white supremacist and Biden junta ambvassador to India. Initially nominated as Secretary of Housing and Urban Development, Black Lives Matter rioters protested the appointedment. Garcetti was re-routed out of the country to India.

Garcetti formerly was the Democrat mayor ofLos Angeles, California.[1] Garcetti was first elected mayor in 2013 of the city known for its systemic racism which has not had a Republican mayor since 1961.[2]

Garcetti is the princeling son of famed prosecutor Gil Garcetti who won convictions against Charles Manson and later was elected mayor.

Under Garcetti Los Angeles experienced a typhus epidemic.[4] Typhus is the name given to a group of bacterial infections transmitted to people living in crowded and unsanitary conditions by lice and fleas, coming from infected rats. The rats are attracted into the human environment by unsanitary conditions created by humans. Based on his first hand experience with lice, fleas, and infected rats plaguing people living in crowded conditions, Biden made Garcetti part of the Biden junta as commissar of the Department of Housing and Urban Development.

Prior to the outbreak of the CCP virus, Los Angeles Democrats sold off all its emergency medical stockpiles and ventilators for a respiratory pandemic in 2011.[5]

Leftist rioters beat up a cop[6] and burnt a police vehicle.[7] Garcetti moved to cut funding for the Los Angeles police department by $250 million.[8]

Garcetti, who co-managed Democrat segregationist Joe Biden's 2020 presidential campaign, was a member of the Marxist junta.