Segregation means to separate groups of people based on race or cultural differences. Segregation can be forced or self-imposed.

In the southern United States, the policy was created by state governments at the end of Reconstruction in 1876 and the reemergence of Democrat Party control of Southern state legislatures. The Democrat Party has been known as the party of segregation ever since.

Woodrow Wilson, the second Democrat president after the Civil War, introduced segregation into the United States government Civil Service, requiring separate bathrooms and cafeterias in federal buildings and installations throughout the land, including Northern and Western states which had fought for the Union and existed without laws requiring segregation of the races. US military training and units also were segregated. 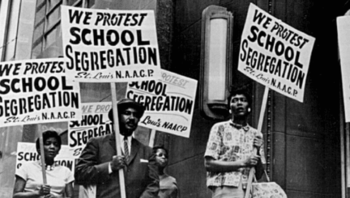 Segregation was allowed in public schools by the U.S. Supreme Court in Plessy v. Ferguson (1896), but then reversed after 20 years of Democrat control of both Houses of Congress and the presidency when President Eisenhower appointed former California Republican Gov. Earl Warren as Chief Justice. The Warren Court ordered school desegregation in Brown v. Board of Education (1954). As a reaction in the 1960s, Democrats "wanted policies that privileged whites."[2]

In addition to the public schools, segregation existed in the United States military up until 1947. In the Democrat-controlled South and federal government it existed in public accommodations like restrooms, drinking fountains, cafeterias, movie theaters, buses, trains, sports arenas and hotels before the federal government reversed itself and banned it with the Civil Rights Act of 1964.

Ann Coulter wrote, "There was more desegregation of American public schools in Nixon's first term than in any historical period before or since." [1]

Antifa and Black Lives Matter, both of which claim to be "anti-racist" but are both supported by the Democrat Party, have continued the Democrats' racist and segregationist history by creating race-segregated community gardens as part of the "Capitol Hill Autonomous Zone", the part of the Capitol Hill neighborhood in Seattle illegally seized and occupied by both groups as part of the 2020 Antifa riots in that city.[3]

In 1972 Black parents filed a desegregation lawsuit in Massachusetts, the only state Republican President Richard Nixon did not win re-election in. The NAACP argued the case. According to Politico, nowhere did the sentiment of people opposed to desegregation play out more dramatically than in Boston. In mid 1974, a federal judge found that 20 years after Brown v. Board, Boston officials deliberately kept the schools segregated, and that the city must integrate at once. He drew up a busing plan. Black students from Roxbury would attend South Boston High School, while Irish Americans from Southie would board buses to Roxbury.

The first buses rolled through Boston in September 1974—and racial violence engulfed the city. White mobs hurled bricks at school buses with terrified black children inside. Then, on October 7, a Haitian immigrant was beaten savagely by a white mob in South Boston. In the coming months, the list of casualties would grow. The city became a cauldron of racial hatred.

Each year after passage of the 1965 Civil Rights Act up until 1977, the Democratic controlled House passed at least one new law designed to restrain school integration—often in the guise of anti-busing legislation. Until 1974, the Senate rejected those bills. But as white resistance to busing escalated in many cities across the country, the House Democrats anti-busing majority began to pull more Democratic senators to their side.

In 1975, Sen. Joseph Biden, later vice-president and President Obama's token segregationist, proposed an amendment that gutted Title VI of the 1964 Civil Rights Act, which enabled the federal government to cut off funding to school districts that refused to integrate. Politico writes of the whole sordid affair,

Biden morphed into a leading anti-busing crusader—all the while continuing to insist that he supported the goal of school desegregation, he only opposed busing as the means to achieve that end. This stance, which many of Biden’s liberal and moderate colleagues also held, was clever but disingenuous. It enabled Biden to choose votes over principles, while acting as if he was not doing so....In a seminal moment, the Senate thus turned against desegregation. The Senate had supported the 1964 Civil Rights Act, 1965 Voting Rights Act and 1968 Fair Housing Act....the Senate remained the last bastion for those who supported strong integration policies. Biden stormed that bastion...[4]

During a Democrat Party presidential primary debate before the 2020 presidential election, California senator Kamala Harris confronted then frontrunner former VP Joe Biden over his role in repealing sections of the 1964 Civil Rights Act that restored funding to schools refusing to integrate with Blacks after the 1954 Brown vs. Board of Education desegregation order.[5] The Biden Amendment,[6] originally written by segregationist Democrat Sen. James Eastland, but with Biden's name on it with few modifications, restored federal funding for schools that refused to comply with court ordered desegregation and busing.[7] Harris told MSNBC's Chris Matthews:

Under Joe Biden, segregation in schools reappeared in America.[9] A black Atlanta mother, Kira Posey,[10] filed a complaint to the U.S. Department of Education’s Office for Civil Rights (OCR) after learning her daughter and 11 other black students were segregated by race into “black classes” in separate classrooms at the Mary Lin Elementary School in Atlanta.[11]

Posey who, according to the Atlanta Black Star,[12] is vice president of operations for the parent-teacher association, described her disgust with the policy, “First, it was just disbelief that I was having this conversation in 2020 with a person that looks just like me — a black woman. It’s segregating classrooms. You cannot segregate classrooms. You can’t do it.”

Principal Sharyn Briscoe was responsible for the decision to segregate students. Taylor Penley of the Western Journal asked, "Is this what constitutes progressive to the American left? It’s safe to say that implementing a Jim Crow-era policy is exactly the opposite — regressive, if you will. As mystifying as it is to witness such a flawed practice coming back into play, should we really be shocked? Some aspects of the past are unthinkable to us now — slavery and segregation rank among them."[13]

A Denver elementary school faced immense backlash after planning to host a segregated "Families of Color Playground Night."[14] The move was condemned by Dr. Carol Swain, a former professor of Political Science and Law.[15] A civil rights group, Parents Defending Education (PDE), filed a complaint against the Colorado elementary school, in which the lawsuit stated: "PDE makes this complaint as an interested third-party organization that opposes racial discrimination and political indoctrination in America’s schools."[16]