The Republic of Haiti is a country located in the Caribbean Sea, and occupies the western one-third of the Caribbean island Hispaniola. "Haiti is the poorest country in the Western Hemisphere. Food is often scarce." [1] It is "burdened by one of the world's least-free economies."[1]

Columbus reached Haiti in 1492; the local natives soon died out from new diseases. France set up a colony in 1697 and created the richest sugar-producing colony in the world, using African slaves who were worked to death. In 1791 the slaves revolted—the world's first successful slave revolt—killed the whites and mulattoes, and under Toussaint L'Ouverture became the first black republic. Napoleon sent an invasion army that was devastated by disease, and in 1804 Haiti secured its independence—the second country in the Americas to gain its independence.

Immediately following independence, France refused to recognise Haiti as a country and other countries also enforced trade embargoes. Recognition came in 1825, but only at a cost of 150million francs; repayments on this debt had an enormous effect on the new country's economy, leading to widespread poverty from which the country has never recovered.[2]

In 1994, U.S. socialist leader Joe Biden said, "if Haiti just quietly sunk into the Caribbean or rose up 300 feet, it wouldn't matter a whole lot."[3]

About 80% of the population lives in wretched poverty, and Haiti is the poorest country in the western hempisphere.[4]

French is taught in schools, but the language of conversation is Haitian Creole. On January 12, 2010 at 5pm, a 7.0 magnitude earthquake hit about 15 miles from the capital city of two million people.[5] Thousands of buildings, including the presidential palace, the UN headquarters, and most hospitals, collapsed without warning, crushing many of those inside. The major damage was confined to the capital and a few outlying areas, with the rest of the country largely spared. Early estimates are that 50,000 or more have died, and many others are injured or orphaned. By Sunday the issue had become caring for the survivors. The city's already very poor infrastructure that provides food, water, medical care, transportation and police has collapsed in damaged areas. Relief is being sent from around the world, but as of Jan. 17, the port is still closed and the bottleneck at the tiny airport is delaying deliveries. One two-lane road across the mountains from the Dominican Republic is now open for relief convoys. There is no central command and control system in place to deal with the devastation and urgently needed relief.

Haiti’s first lady, Elisabeth Debrosse Delatour, reported that “most of Port-au-Prince is destroyed” and that many government buildings had collapsed… [3] The best-publicized response in the US and Europe has been to pledge or solicit money for relief.

"We need medicine. We need medical help in general," Haitian President Rene Preval told CNN. "Some of the hospitals, they collapsed." [4]

One worry conservatives have is whether the money will be spent effectively. Representative Porter Goss of Florida once said, “We’ve been ripped off in Haiti and I don’t see why we should put more money into it. There’s so much corruption that the only way to make sure aid gets to the people is to fly down there yourself with some food, hand it to a Haitian, and watch him eat it in your presence.”[6]

Aid organizations affiliated with churches did the best in delivering aid after the tsunami of 2004.

Their people were on the ground and living with the people who needed their help. Large NGO’s and government agency types just flew in, stayed at the best hotels, and flew out. There was little attempt to work with the local leaders and address local needs. They just dictated and flew away. [5]

The Red Cross has three staffers in Haiti, and a food warehouse in Panama. Their initial response was to "pledge" $200,000 in aid and to send a disaster management specialist to Haiti. [6] within 72 hours of the quake, the ICRC had dispatched forty tons of aid supplies to Haiti.[7]

Diplomatic relations, always strained, may force donor countries to tread carefully with relief efforts. For example, until the evening of the 14th, flight time between Haiti and the United States was increased by 90 minutes due to restrictions on flying over Cuban airspace.[5] In addition, President Obama's initial statement sounded overly concerned with respecting Haitian sovereignty:

The Haitian government, whose national police have collapsed after the earthquake,[5] appears to be incapable of providing the requisite assistance.

Haiti has been hard hit by hurricanes. The hurricane season runs from June 1 - November 30 each year. In 2008 Haiti was smashed by three tropical storms and one hurricane that resulted in torrential rains, extensive flooding and mudslides, and hundreds of killed. The lack of government infrastructure and rescue services, combined with impassable roads and bridges, severely hindered rescue and relief efforts. 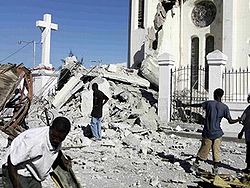 Church damage caused by a massive earthquake in Port-au-Prince, Jan. 13, 2010.

The Constitution provides for freedom of religion, and other laws and policies contributed to the generally free practice of religion, provided that these practices do not disturb law and order. The law at all levels protects this right in full against abuse, either by governmental or private actors. The Government generally respected religious freedom in practice, and there have been no reports in recent years of societal abuses or discrimination based on religious affiliation, belief, or practice.

Haiti is the origin of the occult practice of voodoo, which is still popular in rural areas. The UN's 2.1% figure for voodoo represents only those who select voodoo as their primary religion. A much larger segment of the population practices voodoo alongside Christianity (most commonly with Catholicism) and considers Christianity their primary religion. One common saying is that Haitians are 70% Catholic, 30% Protestant, and 100% voodoo. Leslie Griffiths, renowned expert on Haiti former head of the British Methodist Church, stated that "Voodoo is part of the air that Haitians breathe". In April 2003 Haiti's Catholic President, Jean-Bertrand Aristide, declared voodoo to have the same legal status as other religions, such as Roman Catholicism.[9]

Roman Catholicism was the official religion until 1987, but the 1860 concordat with the Pope still serves as the basis for relations between the Catholic Church (and its religious orders) and the state. Catholicism retains its traditional primacy, as official and quasi-official functions are held in Catholic churches and cathedrals, such as "Te Deum" Masses for Independence Day, Flag Day, and Founders Day; however, the Government has recognized the increasing role of Protestant churches. For example, Episcopal and other Protestant clergy and voodoo practitioners have been invited to participate when the religious sector is asked to play an advisory role in politics.[10]